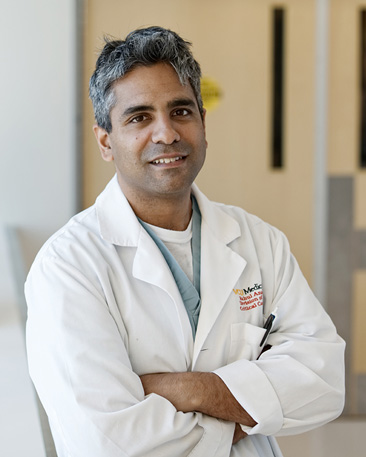 Dr. Anand is an outstanding advocate for the program and his residents. Described as a great educator, surgeon, and mentor, Dr. Anand cares deeply about the residents, their well-being, and professional success. Under his leadership, he re-vitalized the curriculum, revamped educational programming, and created a Chief Resident for Education Position. As a result of the many changes, there has been outstanding improvement in the program’s Board pass rate and performance on the annual ACGME resident survey. Dr. Anand is nationally renowned for his efforts as a surgery program director and this past year he was appointed to

the Board of Directors for the Association of Program Directors in Surgery and was honored as an Associate Member in the Academy of Master Surgeon Educators in the American College of Surgeons.

One nomination letter writer describes Dr. Anand as “a great teacher, role model, and good friend.” The writer goes on to say “Throughout my residency he has been supportive of my endeavors and has provided constructive criticism that has helped me mature as a physician. . . . Dr. Anand is an excellent surgeon who not only has great technical skills, but also articulates his decision making in a way that has helped set the foundation of how I proceed in the operating room.” Dr. Anand also works tirelessly with VCU medical students in advising them for both surgical and non-surgical residencies. Many medical students each year will ask Dr. Anand for his advice and for letters of recommendation. The appreciation that the medical students have for Dr. Anand can be witnessed by the fact the has been a VCU School of Medicine Honorary Hooder at graduation in both 2016 and 2018. Not many other clinicians at VCU have had this honor twice.