Reunion Weekend 2019 saw hundreds of alumni return to the MCV Campus for a weekend's worth of activities, April 5-7. On hand to welcome them back to campus was Dean of Medicine Peter F. Buckley, M.D., who hosted a reception for alumni before they headed to class parties all over town.

In addition to reconnecting with classmates, alumni got a firsthand look at how campus has changed with a behind-the-scenes tour of the McGlothlin Medical Education Center, including the Center for Human Simulation and Patient Safety.

At Mini Medical School, alumni learned what it's like to apply for medical school today and how the school prepares students for the Match process. The students themselves described to alumni how standardized patients and simulation scenarios are put to use in the curriculum.

Tricia Gillen, M'89, and her classmates laughed as they filed into an auditorium during Reunion Weekend and promptly found seats in the same spots they always had during medical school.

"I went straight for the way back corner," she says with a smile. It didn't matter that the auditorium was in the McGlothlin Medical Education Center instead of Sanger Hall, where the medical school's lectures took place in the 1980s.

Some things never change, like the closeness of a class who Gillen says "really went through something together. Medical school is such a grinding marathon and it's your friends who support you. You build those bonds."

The Class of 1989 enjoyed a large turnout for its 30-year reunion, celebrating with a class party at the Richmond home of classmates Susan and Sidney Jones. Gillen and her husband, Jeff Attkinson, M'89, called it a wonderful weekend. "We love to come back."

The Class of 1969 also had a strong showing for its 50th reunion and class party, hosted by Tony Sakowski, M'69, and his wife, Kate.

When John Prince Jr., Robert Squire and Stephen Walker graduated from medical school in 1989, they had more in common than just their MCV alumni fathers, who for decades served as the only family medicine doctors in Emporia, Virginia.

As freshly-minted physicians, they had been inspired by that legacy and planned to follow in their fathers' footsteps as small-town physicians. Thirty years later, they've fulfilled that dream.

In 2015, the classmates and longtime friends paid tribute to their fathers in a dedication ceremony at Southern Virginia Regional Medical Center, where three classrooms were formally named for each of their fathers.

Even though they're living in different towns now, the three keep in touch and don't mind telling tales about one another. Walker, who followed a conventional path to medical school, teasingly points out Prince's time driving a beer distribution truck and Squire's stint as a singer at the Busch Gardens theme park in Williamsburg, Virginia.

Reunion Weekend also serves as an opportunity for alumni to honor their medical school days with a gift in support of the school. The Class of 1979's Charlie Teaters shares why he decided to give back to the MCV Campus during his reunion year with a $10,000 outright gift to the School of Medicine and a $50,000 planned gift.

"The School of Medicine was really good to me, it made my life," Teaters says. "I owe it all to MCV." 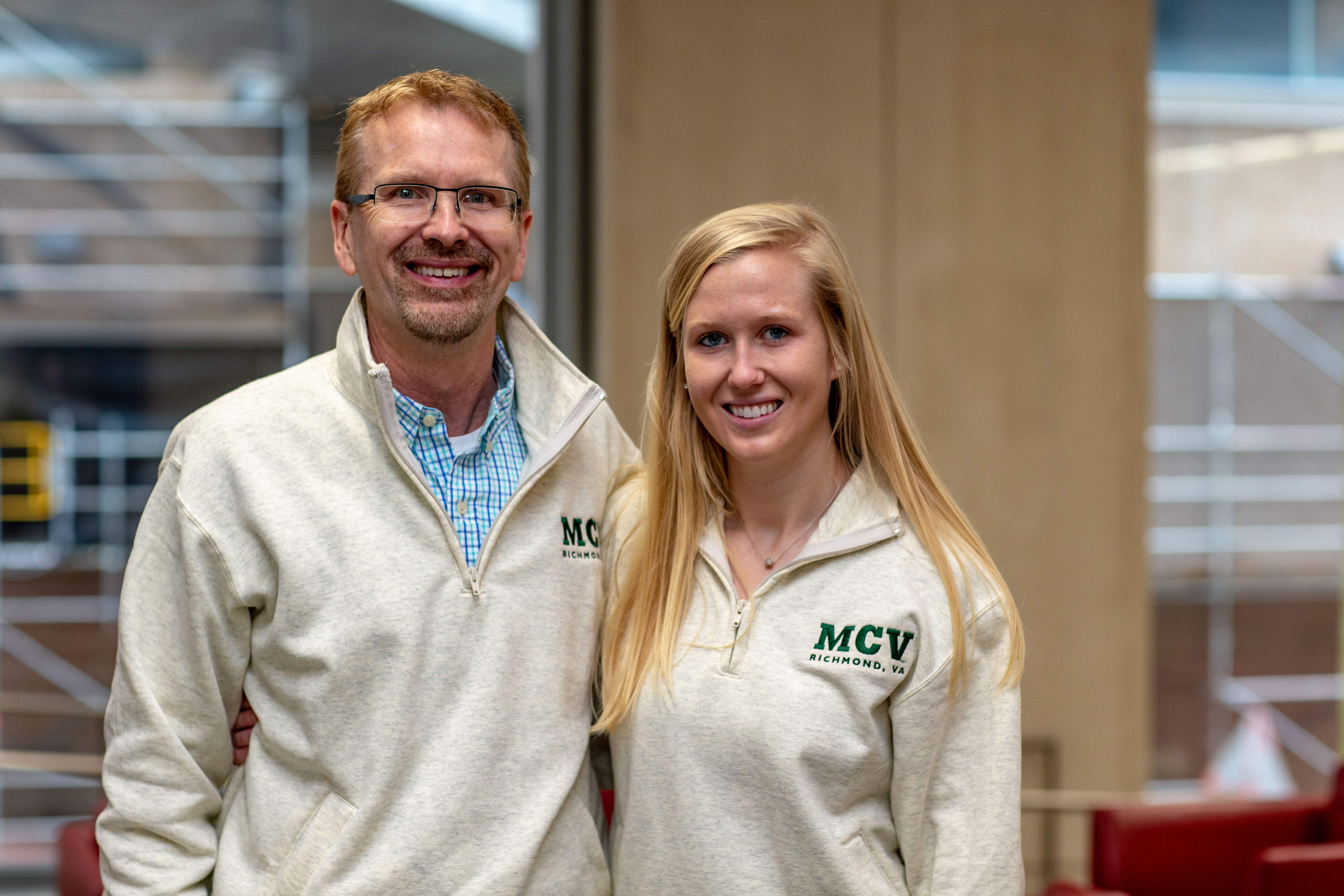 The Class of 1989’s Timothy A. Powell with his daughter, the Class of 2021’s Lauren Powell

Alumni who make gifts and pledges to the School of Medicine through June 30 of their reunion year also support their class giving totals. To date, the classes’ generosity has raised $811,447. Gifts to the Annual Fund and endowed class scholarships (as part of the 1838 Campaign) have a direct impact on students — both today and in the future — providing them with scholarship support and by exemplifying the tradition of alumni engagement with the MCV Campus.

For the second straight year, the university bookstore brought back a limited run of vintage MCV Gear for Reunion Weekend.

The MCV vintage collection is available in person at the Barnes & Noble Bookstore at VCU Medical Center or online at mcvgear.com. Online ordering closes April 15, 2019.

Save the Date: Reunion Weekend 2020

Reunion Weekend 2019 saw hundreds of alumni return to the MCV Campus for a weekend's worth of activities, April 5-7. On hand to welcome them back to campus was Dean of Medicine Peter F. Buckley, M.D., who hosted a reception for alumni before they headed to class parties all over town.