Even before VCU had a formal M.D.-Ph.D. program, Margaret “Kenny” Offermann was determined to earn the dual degrees. The training fed her love of science and her dream of a career in medicine. 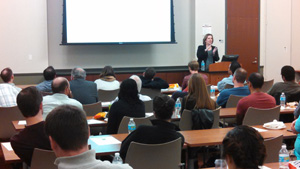 Margaret “Kenny” Offermann, M’80, PhD’81, arrived on campus for Reunion Weekend a few days early to speak to a standing-room-only audience of students and faculty.

Even before VCU had a formal M.D.-Ph.D. program, Margaret “Kenny” Offermann was determined to earn the dual degrees. The training fed her love of science and her dream of a career in medicine.

She reached her goal, despite having to juggle coursework in what were then two separate schools: the School of Medicine and the School of Basic Sciences. She earned her medical degree in 1980 and her Ph.D. in biochemistry a year later.

This month, Offermann returned to campus to speak to the dozens of students enrolled in the medical school’s M.D.-Ph.D. program. She shared with them the lessons she’s learned in a career that’s encompassed roles as a medical oncologist, biomedical researcher, co-director of Emory’s M.D.-Ph.D. program and advocate for health and science policy.

“When I was in graduate school, the disconnect between basic science and clinical care was huge,” she told the standing room only audience of students and faculty. “Now basic science informs the clinical. So be prepared to change. The questions change. The opportunities change. Often, I was at the right place at the right time.”

Offermann cautioned against the temptation of following the biggest, flashiest hot new trend. “It can be like a team of school children learning to play soccer, but everyone is tightly following the ball. Sometimes picking something where no one else is going can make the biggest impact.” 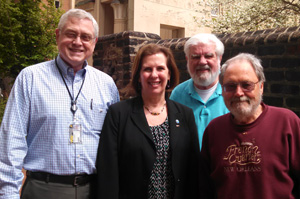 She recounted how taking advantage of those opportunities in her own research career led to a series of seemingly unrelated fields of study. She hopscotched from chemotherapy’s toxic effects, to the modulation of MHC I gene expression, the infection of endothelial cells by measles and Ebola and even the pathogenesis of Kaposi’s sarcoma.

But it was the opportunity to leave academia that gave her the biggest qualms. “I worried it meant turning my back on the career I’d planned and trained for.” But a mentor reminded her “It’s the unexpected that makes life interesting. Don’t let opportunities pass you by when you are busy making other plans.”

She foresaw there would be no turning back in this competitive funding environment. After 17 years, walking away from unpublished data was hard. But she made peace with it knowing that the most promising projects would be carried on by those who had trained in her lab.

And with that, she turned the page, working first with the American Cancer Society, where she would become deputy national vice president for research. Later she’d go to work for FASEB – the Federation of American Societies for Experimental Biology – the nation’s largest coalition of biomedical researchers. She ended her term as its president in 2014.

Offermann’s advice for getting involved:

“Research opportunities outside of academia are not as much hands on,” she said, “but are still intellectually stimulating and important.”

That advice must have buoyed her in what she concedes is a difficult era for persuading federal legislators to fund science.

“Our system for training future scientists has worked well for decades, but it’s been under siege for the past 10 years,” she said.

Fluctuating science funding creates challenges as labs try to maintain momentum, so she gave the students and faculty in attendance concrete ways they could become advocates and speak out on behalf of science. Offermann noted that of FASEB’s 120,000 membership, only a fraction actively participate in letter writing campaigns. Even fewer regularly contribute their perspectives to policy debates.

Offermann’s own days advocating for science are not over. In fact, her visit to Richmond came on the heels of a trip to Capitol Hill to speak with legislators. But now she’s also devoting more time to her role as founder and managing partner of the consulting firm Salutramed Group, Inc., which has interestingly led to the chance to work on video games that deliver health messages.