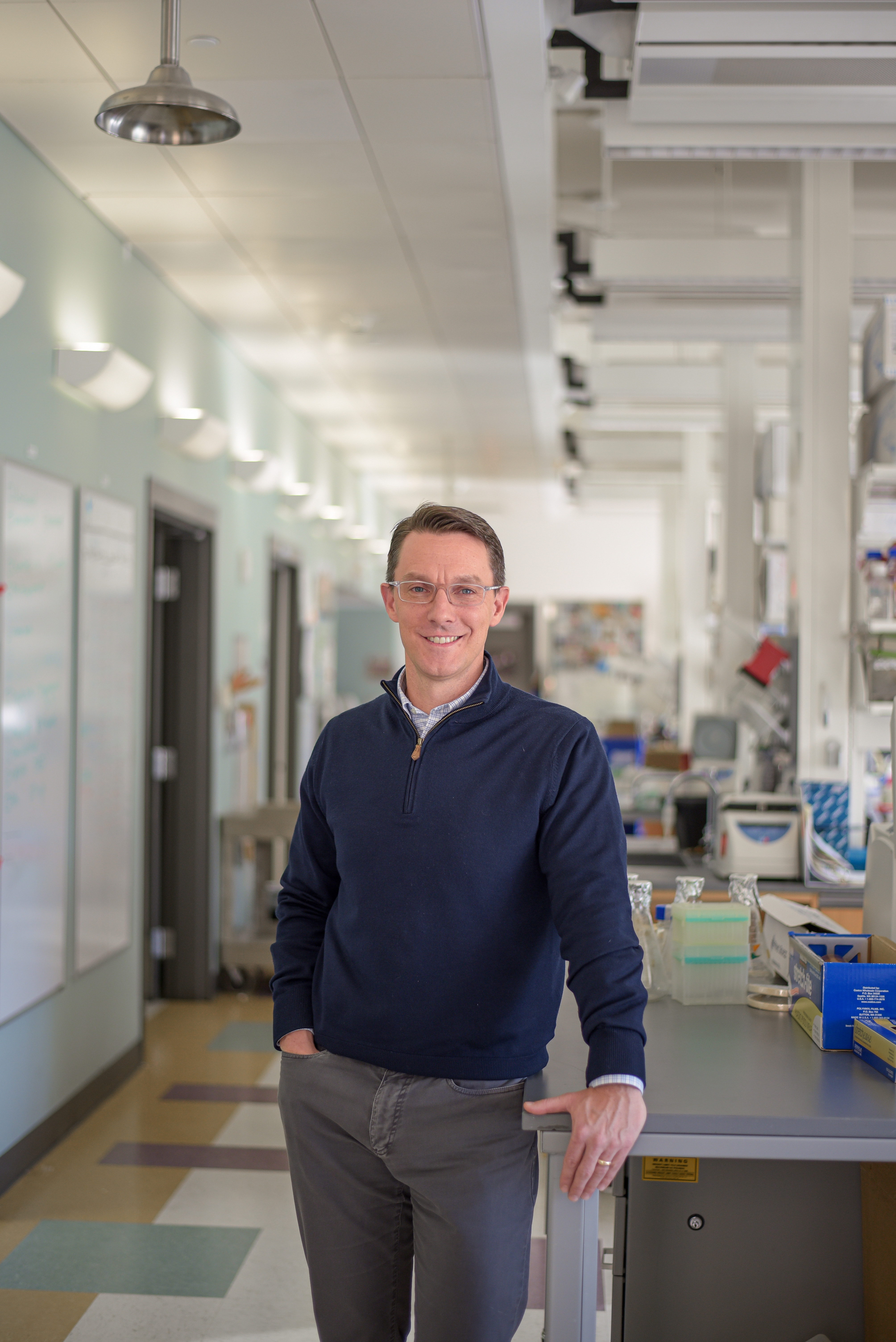 As a young investigator, Jason Carlyon, Ph.D., was awarded funding as a Blick Scholar. That early investment laid the foundation, with Carlyon going on to secure more than $3 million in external funding, recognition from his peers and growing influence in his field. Photography by Jud Froelich

More than 1 million people each year contract scrub typhus, a bacterial disease transmitted through bites from infected chiggers. Although the infectious disease, which can have a fatality rate as high as 70 percent, is most common in the Asia-Pacific region, recent appearances in populations outside of that area indicate that scrub typhus is more of an international health concern than originally thought.

Scrub typhus still has no preventive vaccine, but thanks to the work of Jason A. Carlyon, Ph.D., a professor in the Department of Microbiology and Immunology at the VCU School of Medicine, more is known about the cause of the disease than ever before, and a vaccine might finally be within reach.

Carlyon, a two-time VCU alumnus who earned a bachelor’s degree from the College of Humanities and Sciences in 1993 and a doctorate from the medical school’s Department of Microbiology and Immunology in 1999, joined VCU as an assistant professor in 2007. He studies rickettsial diseases, or diseases caused from bacteria that are transmitted by biting arthropods such as ticks or chiggers. In the case of scrub typhus, Carlyon’s lab has narrowed in on how the disease’s pathogen, a bacterium called Orientia tsutsugamushi, invades human cells and avoids detection by the immune system.

“We’re interested in how Orientia does the things it has to do to survive,” Carlyon says. “How is it able to impair our immune response? What does it do to counteract our immune defenses? What does it have to do to obtain nutrition from our cells in order to survive and cause disease? The idea is that, now that we better understand these concepts, we can begin to work toward a protective vaccine against it.”

A better understanding of how one pathogen operates, Carlyon adds, can often lead to advancements in treatments for other infectious diseases.

“Essentially, if you can understand what any intracellular pathogen does at the molecular level to be successful, you can see how it’s applicable to other pathogens and use that knowledge to identify new targets for treatment or intervention for those diseases as well,” he says. “Ultimately, we want to have pragmatic and translational outcomes that are going to be beneficial to patients, but I think it’s equally important to contribute to a larger body of knowledge that can have a lot of indirect benefits.”

Carlyon’s research has come a long way since he first began studying Orientia tsutsugamushi in 2010 as part of the inaugural cohort of Blick Scholars. The four-year Blick Scholar program, which aims to advance the research of junior faculty members from VCU’s health sciences schools, comes with an annual award from the George and Lavinia Blick Research Fund. Created with a $2 million bequest, the fund was a gesture of gratitude from Lavinia Blick, who died in 2007 at the age of 93, to acknowledge the care that she, her husband and her father received at MCV Hospitals and later at VCU Medical Center. A widow with no children or living relatives, Blick named the MCV Foundation as a beneficiary in her estate plan, with her only stipulation that the gift support medical research on the MCV Campus at VCU.

“When I became a Blick Scholar, I had spent the previous 12 years of my career studying another rickettsial disease, with goals similar to those I’ve had studying scrub typhus,” Carlyon says. “I became aware of how little was known about the fundamental molecular pathogenesis of scrub typhus and saw an opportunity and a need for someone to study it.”

Over his four years as a Blick Scholar, Carlyon received about $50,000 to support his research. That funding, he says, helped him secure the equipment and personnel needed to establish a new research program in the School of Medicine to study Orientia tsutsugamushi.

Discoveries made in Carlyon’s lab have since earned the program more than $3 million in grant funding from the National Institutes of Health and other external sources.

“After that initial funding, we just steadily built the program, getting one grant after another as we continued to generate more and more data and build a line of research that we could pursue long term,” says Carlyon, who was appointed an American Academy of Microbiology fellow in 2019 for his outstanding contributions and achievements in microbiology. “Here we are nearly a decade — and over $3 million in funding — later, and all the discoveries that we’ve made trace back to getting that initial support from the Blick funding.”

Peter F. Buckley, M.D., dean of the School of Medicine and interim vice president for VCU Health Sciences and CEO of VCU Health System, says that support from donors like Blick is essential to the success of VCU’s researchers, particularly as the process to obtain federal grants becomes more competitive.

“We are tremendously grateful to Mrs. Blick, whose vision for research on the MCV Campus has sown the seeds for important medical and scientific advances,” Buckley says. “The Blick Research Fund supports researchers in their quest to win federal funding, which is extremely challenging for young scientists today. Dr. Carlyon exemplifies how philanthropic investment in early-stage research can bear fruit in impactful study findings that, in turn, can be used to secure additional grants to further the research. The recognition he’s received from his peers testifies to his contributions and his growing influence in the field. We’ve seen the Blick Research Fund do the same for others as well.”

Receiving the Blick Scholar award early in his career at VCU felt like recognition for what he had already accomplished and an affirmation that he was on the right track, Carlyon says.

This article was first published in Impact, VCU Development and Alumni Relations’ quarterly magazine for donors and friends of VCU.