Being a successful physician requires a commitment to lifelong learning. 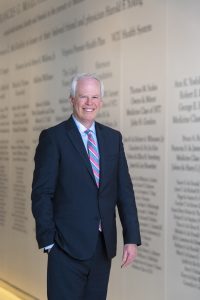 Sternbergh believes continuing education is essential in all medical specialties, and particularly vascular surgery. “At least two-thirds of what I do now I never did in my training,” he says. “If I didn’t keep up my education, I’d be a dinosaur.”

Instead, he is professor and chief of vascular and endovascular surgery at Ochsner Medical Center in New Orleans. The invitation to guest lecture enabled him to contribute his own expertise to the education of tomorrow’s vascular surgeons in memory of Lee, under whom he trained for seven years during his general surgery residency.

“He was a master teacher, technician and surgeon — someone you’d like to emulate,” Sternbergh says. “And he really cared about the people he was helping to train.”

After Hyung Mo “H. M.” Lee’s death in 2013, his family, friends and colleagues made gifts in his memory to create the memorial lecture that bears his name. The focus of the annual lecture alternates between the Divisions of Transplant Surgery and Vascular Surgery.

Sternbergh credits his “superb” MCV Campus training with giving him the comfort and confidence to make sound clinical decisions while operating on critically ill patients.

Decision-making when treating vascular patients is rarely black and white, Sternbergh says, adding “Judgment plays a huge role.” About 80 percent of his patients don’t receive surgical intervention and, instead, are treated medically. His favorite pearl of wisdom for aspiring vascular surgeons? “You may make your living by operating, but you’ll make your reputation by not operating.”

Sternbergh is nationally recognized as an expert on vascular disease and is the author of more than 100 scientific publications and book chapters on the subject. He wrote the leading textbook on the endovascular treatment of abdominal and thoracic aortic aneurysms and is regarded as a pioneer in minimally invasive intervention for hepatic artery stenosis during liver transplantation, his topic for the H. M. Lee lecture.

Mark Levy, M.D., chair of the Division of Vascular Surgery, lauded Sternbergh’s lecture and how it engaged his audience. “I don’t know when I last saw so many questions at the end of Grand Rounds.”

The minimally invasive interventions to treat stenosis that Sternbergh spoke about in the lecture can be unforgiving and difficult, experts agree. Nevertheless, Sternbergh’s experience with the procedures has enabled him to develop a reliably safe algorithm so he can now remedy such stenosis with relatively low risk.

In 1996, Sternbergh joined Ochsner, home to the busiest liver transplant program in the country and where he has performed 150 interventions for hepatic artery stenosis — the largest amount at a single center in the world.

Vascular surgeon Clayton Brinster, M.D., has worked with Sternbergh at Ochsner since 2015 and calls him “one of the best mentors I’ve ever had.” In addition to helping Brinster refine his technical operating skills and leadership abilities, Sternbergh has provided him with “advice and countenance without judgment,” which can be challenging in a high-stress field, Brinster says. “He’s been a real asset to my personal development as a surgeon.”