Congratulations to the graduating Class of 2015!

On Friday May 8, the medical school hosted ceremonies for the MD graduating students as well as its other advanced degree graduates.

Retired professor Robert Kravetz, M.D., was the MD students’ choice to serve as keynote speaker. This was not the first time he’s played a role in the medical school’s graduation weekend. For the last five years, he and his wife Cathy have given bus tours of Richmond to the graduating seniors and their families.

This year was no different. The couple spent morning recounting Richmond’s history to three bus-loads, before Kravetz took the stage on Friday afternoon. For his topic, he chose to return to Richmond’s history, naming Broad Street a microcosm of the American experience and pointing out, “I am convinced that history teaches us where we are and where we need to go.” 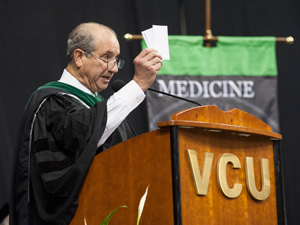 Kravetz also . It’s guidance he originally developed for his own children, but “you students are very much our children too!”

Later in the program, class president Chris Ray came to the podium to deliver his Farewell to the Class remarks. He asked, “How can I even begin to say goodbye to the people that have made these four years the incredible experience that it’s been?” Ray went on to tell his classmates how he valued learning from them over those years.

“To be sure, having the opportunity to represent the Class of 2015 for the past several years has been a profound honor. But so much more than that, the real honor, the real privilege, is having the chance to have been among the Class of 2015 as one of its members,” he said. “The example of our classmates really taught us lessons that were every bit as important as the lessons taught by our professors and attendings.” 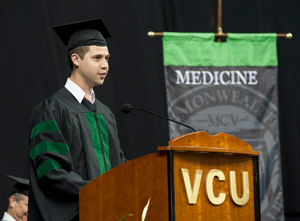 Ray has a special perspective on how valuable those friendships are, and he ended his remarks by telling the .

Graduation weekend also marked the conclusion of training for students with advanced degrees, including 42 who earned doctoral degrees and 85 who earned master’s.

At the Advanced Degree Recognition Ceremony, Jan F. Chlebowski, Ph.D., the medical school’s associate dean for graduate education, shared good news from the Medical Physics, Master of Genetic Counseling and Master of Public Health programs. The three program recently underwent their periodic accreditation review and were approved with no reservations for the maximum number of years by their respective accrediting organizations.