David Adams, M’77, is weary of hearing about “the good old days.” From where he sits as a professor at the Medical University of South Carolina, the best is yet to come. 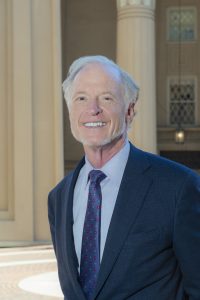 David Adams, M’77, specializes in treating challenging gastrointestinal disease. He recently returned to the MCV Campus for a guest lecture titled “Total Pancreatectomy with Islet Auto Transplantation — When, Why, How.”

David Adams, M’77, is weary of hearing about “the good old days.” From where he sits as a professor at the Medical University of South Carolina, the best is yet to come.

“Every generation is the greatest generation and every generation has its challenges,” says Adams, who has spent three decades at the Medical University of South Carolina. While Millennials often are criticized as work-shy and entitled, Adams sees it differently. “They are ideally suited to be the doctors of the future because they value meaningful work, they’re internationalists, they’re tech-savvy, they like feedback, they’re team-oriented and they’re collaborative.

“So all the things my generation complains about come naturally to Millennials.”

His feelings were reinforced on a recent visit to the MCV Campus when he joined VCU Health transplant fellows and residents on morning rounds. The coordination between the transplant and critical care teams impressed Adams, who hadn’t returned to campus since graduation.

“From what I saw, the future of surgery is bright,” Adams later told attendees at his guest lecture, “Total Pancreatectomy with Islet Auto Transplantation — When, Why, How.”

Adams specializes in treating challenging gastrointestinal disease and performs islet cell transplantation for patients with chronic pancreatitis. Marlon Levy, M.D., chair of the Division of Transplant Surgery and director of the VCU Hume-Lee Transplant Center, calls Adams one of the field’s senior surgeons.

“David Adams has had a long and very influential career,” Levy says. “His particular contributions to surgery for chronic pancreatitis patients underscore his thought-leader status in academic surgery.” 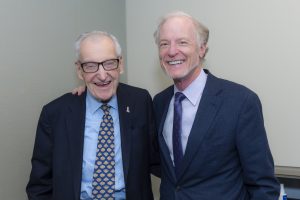 During his return to the MCV Campus, David Adams, M’77 (right), visited with his mentor, the beloved surgeon Walter Lawrence, M.D.

“They were all colorful, smart characters,” Adams says. “Every chance I got, I would go to the operating room to watch Dr. Lawrence work because he’s such a beautiful surgeon.”

Lawrence enjoyed getting to know the young student as well, and the two continued a mentoring relationship over the next 40 years. “I knew when he was an M3 he was going to amount to something,” Lawrence says. “I’m so proud of the work he’s done and his whole career.”

Adams credits the School of Medicine for laying his foundation. “It was easy to transition to an intern after being a medical student here,” says Adams, who completed his residency at the Naval Hospital in Portsmouth, Virginia, where “they were all astonished when I showed up the day before I was to start my internship to get to know the patients. But that’s what you would do on the MCV Campus. You were responsible.”

And the medical students relied on one another.

“There was a great camaraderie among students,” Adams says. “Your rotations were difficult. There was a lot of hard work so you had to depend on others to share the work.”

‘Another mountain to climb’

Adams found his way to gastrointestinal disease thanks to Zfass, who would arrive in his blue corduroy suit and give “wonderful lectures. He made me realize we weren’t there to learn facts; we were there to learn how to think critically. That made it fun.”

After residency, Adams served as chief of surgery at the Naval Hospital in Guantanamo Bay, Cuba. He later transferred to the Naval Hospital in Charleston, South Carolina, where he worked with residents from the Medical University of South Carolina and rekindled his affection for academic medicine. He went on to spend 18 years performing traditional operations for chronic pancreatitis before transitioning to islet cell transplantation in the late 2000s.

“We weren’t always successful with traditional operations and frequently we were unsuccessful,” Adams says. “So we had to think of new ways to treat patients. One way to deal with the terrible pain was to remove the entire pancreas before patients have nerve damage and then, so they don’t become diabetic, transplant the islet cells into the liver.”

In medical school, Adams didn’t know his life’s work would lead him to fighting chronic pancreatitis. But his patients showed him the way.

“You serve the needs of where you are,” he says. “What became apparent to me was that chronic pancreatitis is and was poorly understood and these people suffered.”

Even with the latest progress, chronic pancreatitis remains a baffling disease with many unanswered questions. “That is what’s so exciting,” Adams says. “What’s the new frontier? Where are the new answers going to come from? There is always another mountain to climb.”

Find out when your class will celebrate Reunion Weekend or contact the Office of Development and Alumni Relations at (804) 828-4800 or MedAlum@vcu.edu to schedule a tour.