She measures 6 inches from head to toe and just over 1 inch across at her widest point.

She measures 6 inches from head to toe and just over 1 inch across at her widest point. 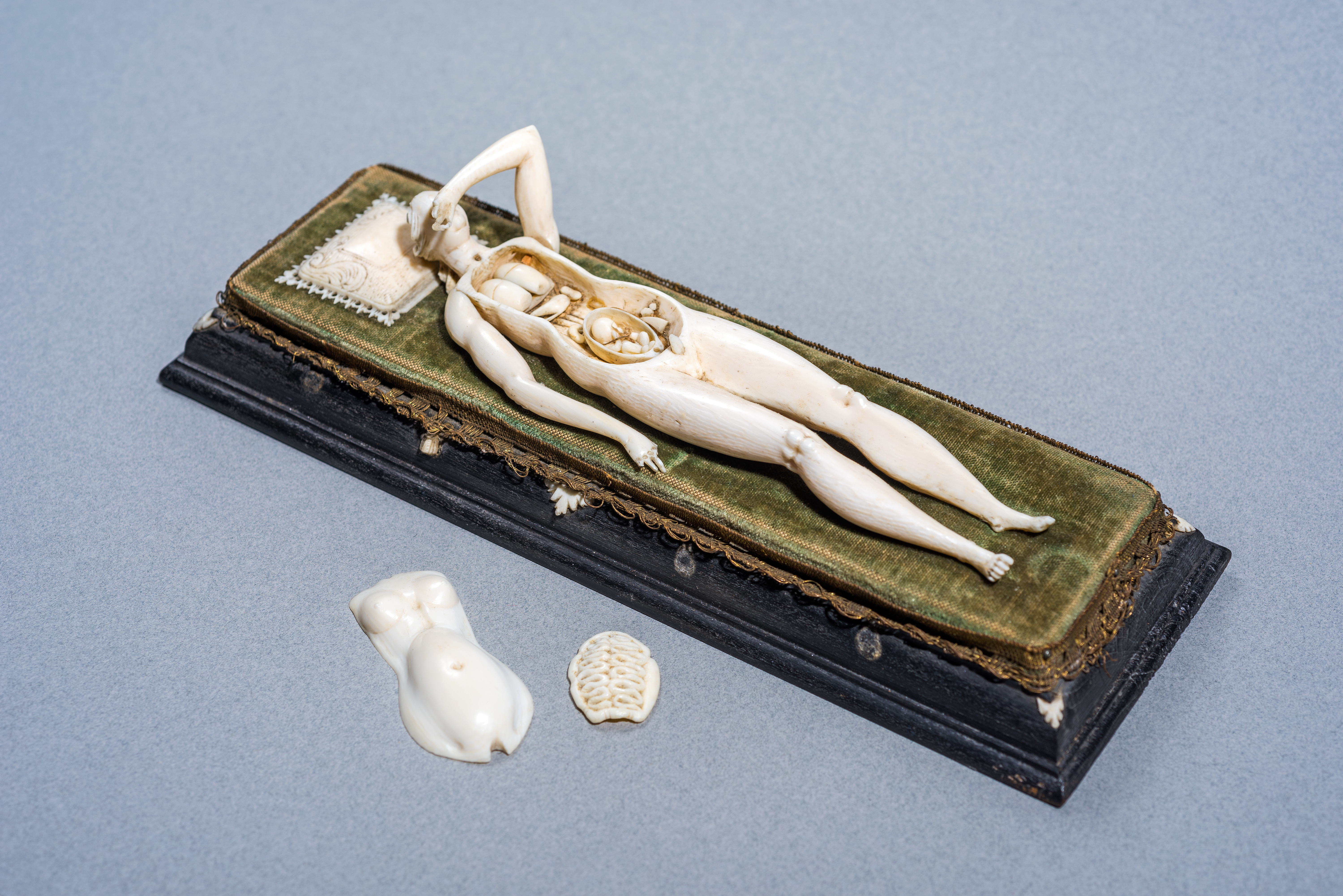 Removing her chest plate reveals minuscule lungs and kidneys, with a few other organs spread about. A fetus lies within the 2 ½-centimeter womb, attached to his “mother” with a brown, threadlike umbilical string.

This hand-carved, highly intricate, ivory anatomical model was most likely produced in Germany during the 1600s or 1700s. Donated to the Richmond Academy of Medicine in the 1940s by an unknown patron, it is one of about 100 in existence today in collections spanning Europe and the United States.

Despite how bizarre the models may seem, Bain notes, “Ivory is a precious material, so people held onto them. They have a quirky curiosity.” Likening them to the eccentrically Gothic cartoon characters created by filmmaker Tim Burton, he adds, “When people see them, they are instantly drawn to them.”

The Tompkins-McCaw Library, which has managed the Richmond Academy of Medicine’s collection since the 1980s, has regularly displayed this piece over the years.

“She always attracts a lot of interest,” Bain says. Although everyone wants to know what she was used for, there is some confusion surrounding that question.

Because the organs are so tiny and not precise, Bain says it is unlikely that these models were made for medical teaching. More likely they were displayed by physicians in their homes or offices.

“There is no question in my mind that this is a status piece,” he says. “The elaborateness, the richness of the ivory material suggests this was a showy item that was used to convey one’s wealth.”

The model sits on elegant green felt, her head resting on an ivory pillow. Her body is incredibly detailed, from the tiny feet, showcasing individually sculpted toes, to her well-defined knees. But her eyes are pulled shut, her mouth is too tiny and her nostrils too large. Her arm lifts to cover her face when her abdomen is opened to expose the womb.

“Presumably, someone thought at one time that this was a handsome piece,” Bain says. “Even though it is not an accurate depiction of a woman’s body, it was still considered a little taboo. For the lay person, especially, it must have been quite a shock to see one of these ivory models.

“Even as tiny and disproportionate as they are, they did give people a glimpse inside the human body. Maybe they helped open a conversation between doctor and patient.”

Whatever the models’ purpose, they remain popular among collectors today. One recently sold at auction in London for nearly $5,000.

“I would love to know the full story of this piece,” Bain says of the Tompkins-McCaw model. “She must have had an interesting journey to get all the way to Richmond. But that’s part of the fun of uncovering history. You are always on the hunt for answers.”