Joseph P. Sherman, M’85, H’88, got an early start on Reunion Weekend, making the cross-country trip from Seattle a day early to talk to the M4 Capstone Course about avoiding burnout and maintaining a passion for the profession. 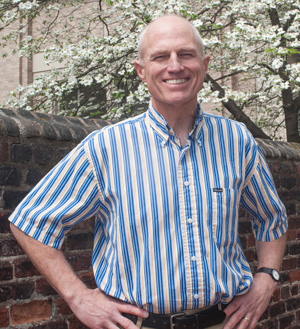 Joseph P. Sherman, M’85, H’88, got an early start on Reunion Weekend, making the cross-country trip from Seattle a day early to talk to the M4 Capstone Course about avoiding burnout and maintaining a passion for the profession.

His launching point was the concept of work/life balance. “It’s a bit of a misnomer,” he said. “It implies work is on one side, life is on the other. But it’s all life. And working as a doctor is a role you play. Not who you are. It’s what you do.”

His own career includes a decade working as a general pediatrician at Children’s National Medical Center and Georgetown as well as two international stints. During the first in Kampala, Uganda, he conducted clinical drug trials in mother-to-child HIV transmission prevention. In the second, he went to Cochabamba, Bolivia, where he worked with the Maryknoll Lay Missioners serving the rural, indigenous population in the Andes.

He says those experiences taught him that the key to not just surviving but thriving is to discover who you are and why you do what you do.

Even during his international postings, he always managed to come back for Reunion every five years. His affection for his classmates is clear. He began his presentation with a series of slides from his own fourth year, a time he remembers as full of joy – joy found in a love of caring for patients and in a love of practicing together with his classmates.

But, at one point, he’d just about lost that joy. He and his family had returned from Bolivia where he’d practiced holistic medicine and loved caring for his patients, not just their health, but many facets of their lives. He couldn’t find a situation in America that would allow him to practice in that same way.

He’s not alone. He cited a shocking statistic that 40 percent of practicing physicians would quit tomorrow if they could afford it.

At his lowest point, he got a phone call from Richmond. It was a mother he’d met when he was an intern in the NICU. “When my baby was born,” she told him, “I was addicted to heroin. He was premature, sick. I was worried and felt guilty. You told me my baby would be ok.”

She explained how the conversation had changed her life. It motivated her to enroll in recovery. She went back to school, and now worked on the MCV Campus.

And her son? The three-pound baby had grown into a football lineman who was getting ready to graduate from college.

“I got into medicine to sit with people through crises in their lives,” Sherman explained. “I happen to know more science and medicine than they do. But that’s not the important part. I wanted to help people.”

Think of the time you first decided you wanted to become a doctor.

What were the circumstances?

What were your hopes and dreams?

What do you remember about your first day of medical school?

Why were you there?

Why were all those other people there?

Did your hopes and dreams change from when you first thought of being a doctor?

What did you notice happening to you as you progressed through medical school?

How were you influenced by your peers and supervisors?

Did you hopes and dreams change?

How are you different than when you started?

Now you are starting residency.

What do you expect will happen to you?

How will you continue to be molded by the expectations of your peers and supervisors?

How will you maintain your hopes and dreams?

That phone call reminded him he still could. So he stayed in medicine, choosing to work part-time in two pediatric clinics: one a safety net clinic and the second based on a hybrid model that is half Medicare patients, half fee-for-service on a sliding scale. “Blue collar concierge pediatrics” he calls it.

Sherman’s schedule allows him to be the primary parent at home for his two teenage children, and he stays active in international medicine through periodic trips to Latin America.

He also makes a point of sharing what he’s learned. He consults with physicians to improve morale and fight burnout by facilitating reflection groups and retreats on spirituality, meaning in medicine and working with integrity and authenticity in today’s health-care environment.

At the M4 capstone Course, he asked the students to recall when they first wanted to be a doctor. From there, he took them on a mental journey to the first day of medical school, to third-year clinical rotations and up to today, when they are ready to start residency. (see sidebar)

“Have your hopes and dreams changed from when you first thought of being a doctor?” he asked them. “In clinical rotations, you’re rewarded for morphing into what other people want you to be. There’s a danger of forgetting who you are and why you want to be a doctor.”

He warned that there would be a similar risk during residency and suggested that they take note of when there is a match of “soul to role” in their work. “Whether it’s in vascular surgery or on hem-onc rounds, take note when you say to yourself ‘I can’t wait to do that again!’”

To help spot these moments in the busy residency years, he suggested journaling or joining a reflection group.

“As time went on, I realized how much my identity as a doctor confused me,” he said, remembering an era earlier in his career. “It became who I am, not what I do. I want you to hold on to the thread that tells you ‘this is why I practice medicine’.”