The respect Joe Ornato, M.D., has enjoyed over his 40-year career has now taken tangible form. 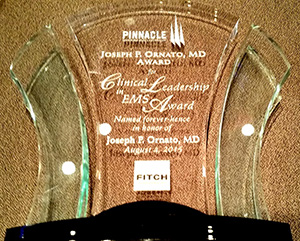 The respect Joe Ornato, M.D., has enjoyed over his 40-year career has now taken tangible form.

He was honored this summer at the Pinnacle EMS Leadership Conference in Jacksonville, Fla., with the announcement that a national award recognizing leadership in the emergency medical services field would carry his name.

Triple board certified in Internal medicine, cardiology and emergency medicine, Ornato is professor and chairman of the Department of Emergency Medicine. He is also medical director of the Richmond Ambulance Authority, Richmond Fire & EMS and Henrico County Division of Fire.

Reporting on the award, the Journal of Emergency Medical Services described him as the “undisputed leader in EMS and ED use of coordinated team resuscitation practices” from induced hypothermia to uninterrupted, continuous-compression CPR and rapid cath lab delivery/intervention. 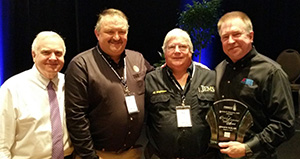 “Ed was one of my first trainees,” said Ornato. “I had nothing to do with his selection but was delighted when the selection committee chose him to receive the award.”

After completing his residency with Ornato in 1987, Racht joined the faculty of the medical school and served as associate chief of the medicine section of Emergency Medical Services. During his eight-year tenure on the MCV Campus, he was appointed by two Governors of Virginia to three successive terms on the Virginia State EMS Advisory Board.

Racht is now the chief medical officer of American Medical Response, the largest EMS provider in the nation, and in 2008 he was named a “Hero of Emergency Medicine” by the American College of Emergency Physicians.

Ornato earned his medical degree at the Boston University School of Medicine and completed an internal medicine residency at Mount Sinai Hospital and a fellowship in cardiology at New York Hospital-Cornell University Medical Center. A member of the Institute of Medicine, Ornato is past chairman of the American Heart Association’s National Emergency Cardiovascular Care Committee and also chaired the national steering committee on the NIH Public Access Defibrillation Trial.