Out of the Classroom, Into the Clinic

Physicians don’t practice medicine in a classroom. Yet for more than a century, medical students spent a great deal of their time in one. 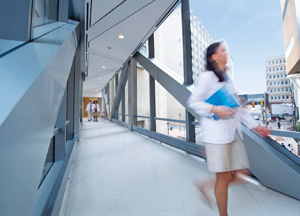 Physicians don’t practice medicine in a classroom. Yet for more than a century, medical students spent a great deal of their time in one.

That’s the heart of the medical school’s new curriculum, which takes learning outside lecture halls and into real-life situations right from the start.

Students who arrived on the MCV Campus in 2013 were the first class to dive into an experiential-based curriculum, developed with input from more than 200 faculty members, administrators and students.

“We have moved on from just supplying students pearls of knowledge for them to give back to us,” said Isaac Wood, M’82, H’86, F’88, VCU’s senior associate dean for medical education and student affairs. “Now we expect them to problem solve, think critically, appraise literature, figure out what’s important and what’s not important and take ambiguous data and make sense of it before they get in the clinical situation. Because that’s what the clinical world is.”

“The goal of redesigning the pre-clinical years was to eliminate unintended redundancy and teach students in ways that mirror what we know about adult learning and best practices in education,” explained Michael Ryan M.D., assistant dean for clinical medical education. “In the clinical setting, much of what they learn is experiential in nature, learned on the fly at a patient’s bedside or in the context of a particular case.”

It’s a fairly radical change from the old curriculum, which relied on large-group lectures the first two years and a lot of memorization. Though it was occasionally updated, the basic model was more than 100 years old, reflecting medical education recommendations from a 1910 report by educator Abraham Flexner.

Other curriculum changes reflect how today’s physicians are treating patients, said Ryan. The old model was designed for a time when most people died of acute life-threatening illness such as tuberculosis or pneumonia. Today, a bigger threat is chronic disease such as diabetes and hypertension.

Though two years of learning is now compressed into 18 months, the new curriculum doesn’t skimp on the basics. But it’s more teamwork and technology-based, teaching students how to think, where to retrieve information and how to then apply it. A Practice of Clinical Medicine course, designed to integrate basic principles into clinical scenarios, is the core of the first year, getting M1s out of lecture halls and into situations requiring a hands-on experience.

The medical school’s new curriculum also helps eliminate what is perceived as a gap between what medical schools teach and what is expected for interns. (see sidebar)

“It’s about cultural competency, safety training, clinical assessments of competency, truly measuring skills. It’s not ‘do one see one teach one.’ Instead, it’s life-long learning which they continue to refine,” said Craig Cheifetz, M.D., regional dean of the VCU School of Medicine’s Inova Campus, where about 31 M3s and 31 M4s study each year.

In addition to stressing high-quality care, teaching patient safety is always paramount today, said Wood. “You don’t lay hands on a patient until you have demonstrated competency on a standardized patient or a high-fidelity mannequin. And then, when you actually lay hands on a patient, there is a great deal of supervision.”

Teaching those competencies is easier because the new curriculum debuted at the same time as the opening of the $158.6 million James W. and Frances G. McGlothlin Medical Education Center. Located on the MCV Campus between Main and West hospitals, the 12-story, 200,000 square-foot building boasts areas designed for team learning and a state-of-the-art Center for Human Simulation and Patient Safety.

That 25,000-square foot space features high-tech mannequins to simulate procedures from childbirth to colonoscopy, as well as live standardized patients, often drawn from VCU’s Department of Theatre. From the time they enter medical school, students work in teams, using a specially designed computer system to order physical examinations and laboratory tests, diagnose conditions – and justify the time and money they spend.

“We’re giving them opportunities at lower stakes to practice skills before they hit the wards,” said Ryan.

“I’m starting to see more programs like ours with the pre-clinical piece involving an integrated curriculum of basic science information as it applies to the clinical care of patients,” said Wood. “I think we were pretty revolutionary in turning it upside down.”

The moment of truth

As a result of the compressed curriculum, M2s were able to take the U.S. Medical Licensing Examination’s Step 1 test this winter, months earlier than previous classes.

Just as the medical school’s curriculum is a far cry from the past, today’s Step 1 is a very different test than many physicians remember, said Wood.

“Every single question is a clinical question that tests basic science knowledge. So that’s the whole approach we’re taking, and we’re hoping they’re going to feel more comfortable, more confident and come out with a higher score.”

The test today is much more than just words on paper. “There are photographs, videos, you listen to heart sounds, to breath sounds. You can, with the mouse of the computer, move the stethoscope around parts of the virtual patient. You’ll do a biopsy and they’ll send you results you have to interpret,” said Wood.

“There is recognition now that unless you’re going to be a surgeon, it’s more important to understand functional anatomy than structural anatomy,” he said. “An example would be in an old practical exam, after someone had studied the brain, they’d put out a specimen of a brain and stick in a pin somewhere and ask what it is. Now, we might describe, for example, a 56-year old man presenting with slurred speech and weakness on the right side, and they’ll ask which area of the brain most likely has an occluded artery. They want you to know functional anatomy.”

Many wondered if paring down the pre-clinical curriculum would affect students’ performance. Would they have enough time to learn the materials and pass the test?

Wood expects to see excellent results from students, as good or better than recent years’ 94-95 percent first-time pass rate that’s been around the national average. At press time, 93 percent of the class had received their scores from the Step 1 examination. There had been only one failure (compared to the usual 6-8) and average scores were running 12-13 points higher than previous classes.

Clerkships Get Started in Second Year

Passing the test means students get to move on to the expanded clinical offerings sooner. “In third and fourth years, we’re giving them the opportunity to explore some specialties that they didn’t have in the past until the fourth year,” said Ryan. “So, all the students this year will have flexible elective blocks where they can try out something like anesthesiology or radiation oncology.

“About 25 percent of our students match into residencies in specialties outside of the core clerkships,” he said, referring to the seven core clerkships traditionally offered: family medicine, internal medicine, neurology, OB/GYN, pediatrics, psychiatry and surgery.

”Those students entertaining fields such as emergency medicine or radiology, for example, are especially excited about the chance to try them out earlier in the clinical curriculum, not just a month or two away from doing residency interviews in the fourth year.”

Some rotations have been changed to offer more diverse experiences. For example, said Wood, what used to be a 12-week rotation in internal medicine is now eight weeks, but students are seeing a wider range of conditions in that time instead of spending large blocks of time in one specialty area.

Increased flexibility in years three and four is a big draw of the new curriculum, said Wood. Students have about 62 schedule options so they can choose what they feel works best for their interests.

The curriculum also includes four weeks of flexible time off, something that stressed-out students can use.

If the flexibility of the new curriculum has been good for students, it’s also been good for faculty, who have had to think about new ways to engage students and present material. Wood noted that’s he’s seen some faculty members blossom with the new experiential focus.

As the results of this year’s Step 1 exam continue to come in, administrators will determine if the new curriculum is a resounding success or whether some tweaks are still needed.

“It’s keeping us on our toes,” said Cheifetz. “And the exciting time will be in a year or two when we see assessments. I think change is good. We have the opportunity to make things better.

“Medical school has been the same for 100 years. I believe that to work and develop better programs that will make better doctors is a welcome challenge.”

How well does the medical school’s new curriculum prepare students? We’re about to find out, along with some of the top schools in the nation.

The School of Medicine has been selected as one of 10 in the U.S. to make up a pilot cohort to test the implementation of the new Core Entrustable Professional Activities (EPAs) for Entering Residency. The guidelines, established by the Association of American Medical Colleges (AAMC), are intended to help bridge the gap between medical school curriculum and patient care activities all new physicians should be able to perform on day one of residency training without direct supervision.

VCU is part of an impressive group of institutions selected for the program, including Columbia, Yale, the University of Texas and Vanderbilt.

The 13 EPAs identified by the AAMC include skills like recommending tests, collaborating as part of a team and prioritizing differential diagnoses. All are designed to increase patient safety and quality of care.

“Our focus is to eliminate what is perceived as a real gap between how medical school typically trains students and what is expected when they are interns,” said
Michael Ryan, M.D., assistant dean for clinical medical education, one of the medical school’s team members for the pilot program.

He believes the school’s updated curriculum is preparing students well for the EPAs. “They’re functioning in an inter-professional team and learning how to deliver high quality care. In addition, with a required ambulatory clerkship, students will have more exposure to real-world medicine outside the academic setting. That gets students thinking about cost-effective treatments, working with insurance companies and other experiences.

“We’re trying to ease the transition at all stages, from the pre-clinical to clinical years, medical school to residency, and eventually, residency or fellowship to clinical practice.”