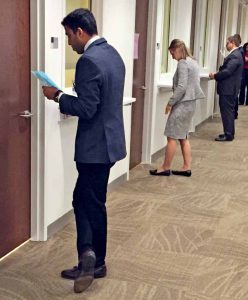 Wait for the bell: A series of interviews is designed to identify core competencies and personality. A bell prompts students when it’s time to uncover and read the question they’ll be asked. They get two minutes to ponder the answer, then enter a private room and spend the next seven minutes with the interviewer.

Each year, finding and nurturing that kind of physician-to-be is an imperative for VCU’s School of Medicine. Applicants may look good on paper, but winnowing the field to
find those who are smart, empathetic and good at expressing themselves takes special skill. That’s why the School of Medicine now screens students using the new Multiple Mini-Interview (MMI) system.

Michelle Y. Whitehurst-Cook, M’79, H’82, senior associate dean for admissions, explains that the MMI gives students a chance to show off skills that aren’t on their written application. And do it for a variety of stakeholders — faculty, administrators, fourth-year students and select community members.

In the past, a prospective student typically talked with one interviewer, which, she notes, doesn’t tell a complete story.

“We have been very diligent about putting together an objective system for reviewing those files and I think if we get that right, then we’re interviewing people who are smart and nice. We know they’re smart; we use the interviews to see how nice they are and observe their passion for medicine.”

If you’re interested in working with the medical school’s admissions office to identify the most promising applicants, please contact senior associate dean for admissions, Michelle Whitehurst-Cook, M’79, at mwcook@vcu.edu

Keith Baker, Ph.D., is the assistant dean for admissions and an assistant professor of biochemistry and molecular biology. He helped develop the MMI program. “We’re trying to eliminate a subjective approach and see if the person we’ve invited to interview is the same person as they are on paper.”

HOW THE MMI PROCESS WORKS
The fundamental process of gaining admission to the School of Medicine hasn’t changed. Each year, about 9,000 prospective students apply, and about two-thirds are typically weeded out early on because their grades and/or MCATs aren’t competitive enough or they lack relevant clinical or community service experience. The remaining applications — 2,700 last year — were file reviewed starting in July and assigned points for various components. At the end of that process, the highest scorers were invited for an interview. To fill the Class of 2021’s 216 students, interviewers talked to more than 600 candidates.

The interviews were scheduled several days a week August through March. Each candidate rotated through a series of seven stations, each interviewer asking a different question designed to uncover core competencies and personality.

During the process, held in the McGlothlin Medical Education Center, a bell prompts students when it’s time to uncover and read the question they’ll be asked. They get two minutes to ponder the answer, then enter a private room and spend the next seven minutes with the interviewer. Then it’s out and on to the next one.

For students, it gives them a chance to present themselves beyond the essay. “You have several chances to make a good first impression and you don’t run the risk of not having a great personality match or having an interviewer who’s distracted by other things,” says Kiera Sibbald, an M1 who began studies in August as part of the Class of 2021 — the first to go through the MMI process. “And so you’re able to show different
aspects of your experiences and address some things that might be unique about you as an applicant.”

Students are scored on a 1 to 5 scale. Whitehurst-Cook noted that during the school’s inaugural year of MMIs, various interviewers’ ratings tended to correlate and reflect the same impressions of individual candidates. Occasional scores deemed as outliers — if perhaps, a student totally botched an answer — are removed when the committee begins choosing the class. With rolling admissions, the committee takes another look at the applications in conjunction with the interview scores, and offers admission to selected students beginning in October.

Though students don’t know the questions ahead of time, they’re not going in cold.

We’re trying to eliminate a subjective approach and see if the person we’ve invited to interview is the same person as they are on paper.

“To prepare, I used some online question banks, read a couple books and talked to friends who had been through an MMI process somewhere else,” says Sibbald, who completed VCU’s Premedical Graduate Certificate Program last year.

“One of the challenges is knowing what five minutes sounds like when you’re talking, and practicing at home to figure out how to frame an interview in a way that has a good introduction, body and conclusion, and tells a story in a succinct way — and then leaves some room for follow-up questions. I think that’s something the students can practice and can work to their advantage.”

A VARIETY OF BACKGROUNDS
Interviewers are drawn from a variety of sources, Whitehurst-Cook says, including School of Medicine faculty, alumni and students, other medical professionals, and people with backgrounds in teaching, administration or human resources. Though most have a connection to the university, “we use a fair number of community people. These are people who know what they’re looking for in a doctor. We typically find them through word-of-mouth. And while I don’t have a list of criteria, it’s mostly people who’ve been around young people before. “I tell the applicants, ‘these are people who are going to be working with you: your professors, your peers and your patients.’”

Another bonus of the MMI process is its flexibility, Baker says. “We’re doing this for general admissions, but also the guaranteed admissions program (which admits students out of high school) and the preferred applicants (for VCU honors students after their sophomore year). I like that it’s pliable.”

For Sibbald, the process was a great way to meet a variety of people from the School of Medicine. “It offered us an opportunity to get different perspectives on the school. If you finished the question early, you had the opportunity to talk about their favorite part of VCU, why they chose to come here and so on. For me, it was really encouraging to see how many fourth-year medical students chose to be involved in this process.

They didn’t have to give up their Saturday, but it was important to them to give back to the school.”

TRANSITIONING TO THE MMI
Currently, about 30 of the 147 accredited medical schools in the U.S. are using some variation of the MMI process, Whitehurst-Cook says, which was pioneered at Canada’s McMaster University two decades ago.

Admissions administrators spoke to peers at McMaster and each of the medical schools currently using MMIs. “They all said they would not go back to the traditional way of interviewing,” Whitehurst-Cook recalls, though each school cautioned that getting enough interviewers can be a challenge.

Once VCU decided to adopt the MMI system, administrators began crafting questions to identify the best students to make up future classes. “We use behavioral questions and scenarios,” she says. “None are really medical-based. We’re looking for their passion for medicine, motivation, how well they work together, mistakes they’ve made and lessons learned.”

HOW TO BUILD A CLASS

You have to show you care. I don’t think that in this kind of interview process you can fake it.

What’s the most desirable trait in a candidate? “A holistic approach to medicine,” Whitehurst-Cook says. “They’re very respectful — to the attending, to the nurses, to their peers, to the janitor — and most of all, to their patients. We don’t want them to treat a college professor any differently than they’d treat a homeless person, because they really do have the same needs.”

“While all medical schools are looking for the same basic types of students — smart and nice — what sets VCU apart is the desire to attract students who will thrive working with a very diverse patient population,” says Assistant Dean for Admissions DONNA JACKSON, M.ED., ED.D. “I think that’s a draw for prospective students who have true service at their core. There is more to being a doctor than just treating the people who can afford your services. This is a good place where you can get the gamut of those who can and those who can’t, and be able to learn in an environment where you provide the same quality of care regardless of who is in front of you. We teach that well and we model that well.”

While the questions are designed to identify students with dedication and history of community service, also important is finding students who are effective communicators. “There’s an art to medicine,” Whitehurst-Cook says. “We want to be sure they have the communications skills necessary to be good physicians.”

If a physician is sued, oftentimes it’s not because of a lack of medical skills; rather, they lack the aptitude to talk to patients and families, she noted.

“You have to show you care. I don’t think that in this kind of interview process that you can fake it. We’re seeing how well they listen to the questions that are asked.”

MEASURING SUCCESS
The first class selected via MMIs is already hard at work. Admissions committee members are eager to see how they’ll do. “All indications seem to point toward better accuracy in identifying the qualities and traits of the candidates we’re looking for,” Baker says.

“I think you’ll see more and more institutions adopt this,” he adds. “We’re on the cutting edge, and I believe this is a better way of identifying future physicians.

“We’re confident that the people we identify through this process are exactly who we’re looking for.”