Passion pays off: Sanyal to receive premier award in field of liver disease

In November 2018, Arun Sanyal, M.D., will accept the 2018 Distinguished Achievement Award from the American Association for the Study of Liver Diseases. 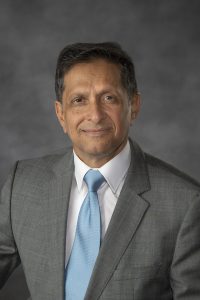 The American Association for the Study of Liver Diseases will honor Arun Sanyal, M.D., who holds the Z. Reno Vlahcevic Research Professorship in Gastroenterology Research, with the 2018 Distinguished Achievement Award, recognized as the premier award in the field of liver disease.

In November 2018, Arun Sanyal, M.D., will accept the 2018 Distinguished Achievement Award from the American Association for the Study of Liver Diseases. The award signifies 30 years of research including 17 continuous years of National Institutes of Health funding, the development of therapeutics reducing liver disease across the globe, and countless international leadership roles and awards.

“This is the premier award in the field of liver disease and Dr. Sanyal is most deserving,” says Dean of Medicine Peter F. Buckley, M.D. “His work is the definition of translational medicine. Through his extraordinary commitment to research, teaching and patient care, and to always finding a better way, he has improved the standard of care for liver disease around the world.”

A housestaff alumnus who’s now a professor in the VCU Department of Internal Medicine and education core director in the VCU Center for Clinical and Translational Research, Sanyal embodies a passion for liver disease that has taken him to the top of his field. It’s a much different place than he envisioned in 1987, when he came to the MCV Campus as a gastroenterology fellow.

“I had no interest in liver disease and I was actually terrified by it because all the patients were dying when I was in training,” Sanyal says.

Then-chair of VCU’s Division of Gastroenterology Z. Reno Vlahcevic, M.D., who had recruited Sanyal, wasted no time in calling the young trainee into his office. “He knew it troubled me tremendously that what was being taught as the best care possible still resulted in the majority of people dying,” Sanyal says. “I thought that was completely unacceptable. He believed that would prove a strong motivator, so he told me, ‘I think you should do liver disease.’

Finding a better way
Today, Sanyal holds the Z. Reno Vlahcevic Research Professorship in Gastroenterology Research that honors his mentor who died in 2000. “At a personal level, it’s extremely poignant and meaningful. I hope I can do him proud.”

Practically, the professorship gives Sanyal the freedom to get early-stage, unfunded projects off the ground with the goal of doing what Vlahcevic knew he wanted — and needed — to do: find a better way to treat liver disease.

“We have developed new paradigms for drug development that are now being used across all the field of liver disease. None of that would have been possible without having an endowed professorship that protects your time for that kind of research,” Sanyal says. “It allows more time for educating young physicians and for developing new ideas and concepts that have a footprint beyond the university to a national and even international level.”

Sanyal has had a hand in three high-profile advances that have improved liver disease treatment since his training days. First, along with a former radiology colleague, he helped establish the foundation for a procedure known as TIPS that places a stent in the abdomen and has helped lower the mortality rate associated with internal bleeding in cirrhosis patients from 30 percent to 15 percent.

Second, he discovered a link between nonalcoholic fatty liver disease and obesity, diabetes, metabolic syndrome and insulin resistance that translated to new treatment and practice guidelines. Finally, Sanyal is in the midst of a study to reverse kidney shutdown in cirrhosis patients that could reduce mortality for this otherwise fatal condition without liver transplantation.

Over the next five years, Sanyal will lead a $14 million national project to find an alternative to using biopsies to test for fatty liver disease. Today, many patients will refuse the invasive procedure, allowing an undiagnosed disease to fester until the only remaining treatment option is a liver transplant.

“By developing simple, non-invasive tools that every physician can use at the bedside, we hope that we will be able to expand access to care for the millions of people who have this condition so we can identify those who need more aggressive attention,” Sanyal says.

“A living textbook”
Sanyal credits his family, teachers, colleagues and patients who have helped him advance the liver disease field.

“Patients are my best teachers,” Sanyal says. “You don’t need a podcast. Every time I walk into a clinic, I’m reading a living textbook.”

It’s a textbook he says he continues to learn from every day.