Thomas Eichler, M’87, H’92, recently began his term as president-elect of the American Society for Radiation Oncology’s Board of Directors. ASTRO is the world’s largest radiation oncology society. 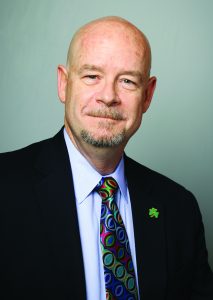 Thomas Eichler, M’87, H’92, recently began his term as president-elect of the American Society for Radiation Oncology’s Board of Directors. ASTRO is the world’s largest radiation oncology society.

As president-elect and eventual ASTRO chair, Eichler will continue a career-long commitment to promoting radiation oncology as the leader in quality, innovation and value in multidisciplinary cancer care.

“I am honored and humbled to be elected as ASTRO’s next president and to work on behalf of ASTRO’s 10,000 members,” Eichler says. “I look forward to working collaboratively

with my colleagues to advance the field of radiation oncology as we continue to seek advanced treatment options, address priority policy issues and advocate on behalf of all cancer patients.”

Eichler spent much of his career with Virginia Radiation Oncology Associates, where he served as president from 2006-16, and with the Sarah Cannon Cancer Institute in Richmond, Virginia. At the institute, he worked as the medical director of radiation oncology until scaling back his clinical responsibilities in recent years to spend more time volunteering with ASTRO.

His volunteer roles have ranged from chair of the ASTRO Health Policy Council and the ASTRO Political Action Committee to senior editor of the member magazine ASTROnews.

Twice Eichler was named ASTRO’s grassroots activist of the year. He was named an ASTRO Fellow in 2013.

“Radiation oncology has a central role in discussions on safeguarding cancer patients’ access to high-quality, high-value treatments,” says ASTRO Board of Directors Chair Brian Kavanagh, M.D., M.P.H., FASTRO. “The dedicated leaders chosen by ASTRO’s 10,000-plus members will help drive these conversations and guide our field on the key issues of education, advocacy, quality and safety.”

A 1974 graduate of the University of Notre Dame with a degree in American Studies, Eichler worked as an orderly before taking pre-med classes at Le Moyne College

in Syracuse, N.Y. After failing to gain admission to medical school, he accepted a friend’s offer to serve as the stage manager for First Street Theater in Dayton, Ohio.

He later relocated to Northern Virginia with his future wife, Alison, and worked at the Folger Theatre as the box office manager.

But he hadn’t given up on his dream of a career in medicine and in 1983, he again applied to medical school and this time was accepted to the VCU School of Medicine.

“I just love the whole process of medicine,” Eichler shares in the fall 2017 issue of the medical school’s alumni magazine 12th & Marshall. “Being responsible for helping people, along with the rigor and discipline involved, really excites me.”

Eichler remains active in theatrical productions around Richmond and has taken on a wide variety of roles, including Kris Kringle in “Miracle On 34th Street,” Andrew Carnes in “Oklahoma!” and Hercule Poirot in Agatha Christie’s “Black Coffee.”

“This chapter of my life has been punctuated by revisiting my love of the theatre and subsequently embarking on a modest acting career that I expect to keep me busy in retirement,” he says. “It has also been an opportunity to expand my volunteer activities with ASTRO, unexpectedly culminating in the honor of being named president-elect.”

He will serve a one-year terms as president-elect, a year as ASTRO president beginning at September 2019’s Annual Meeting and then a year as chair of the board of directors starting in the fall of 2020.