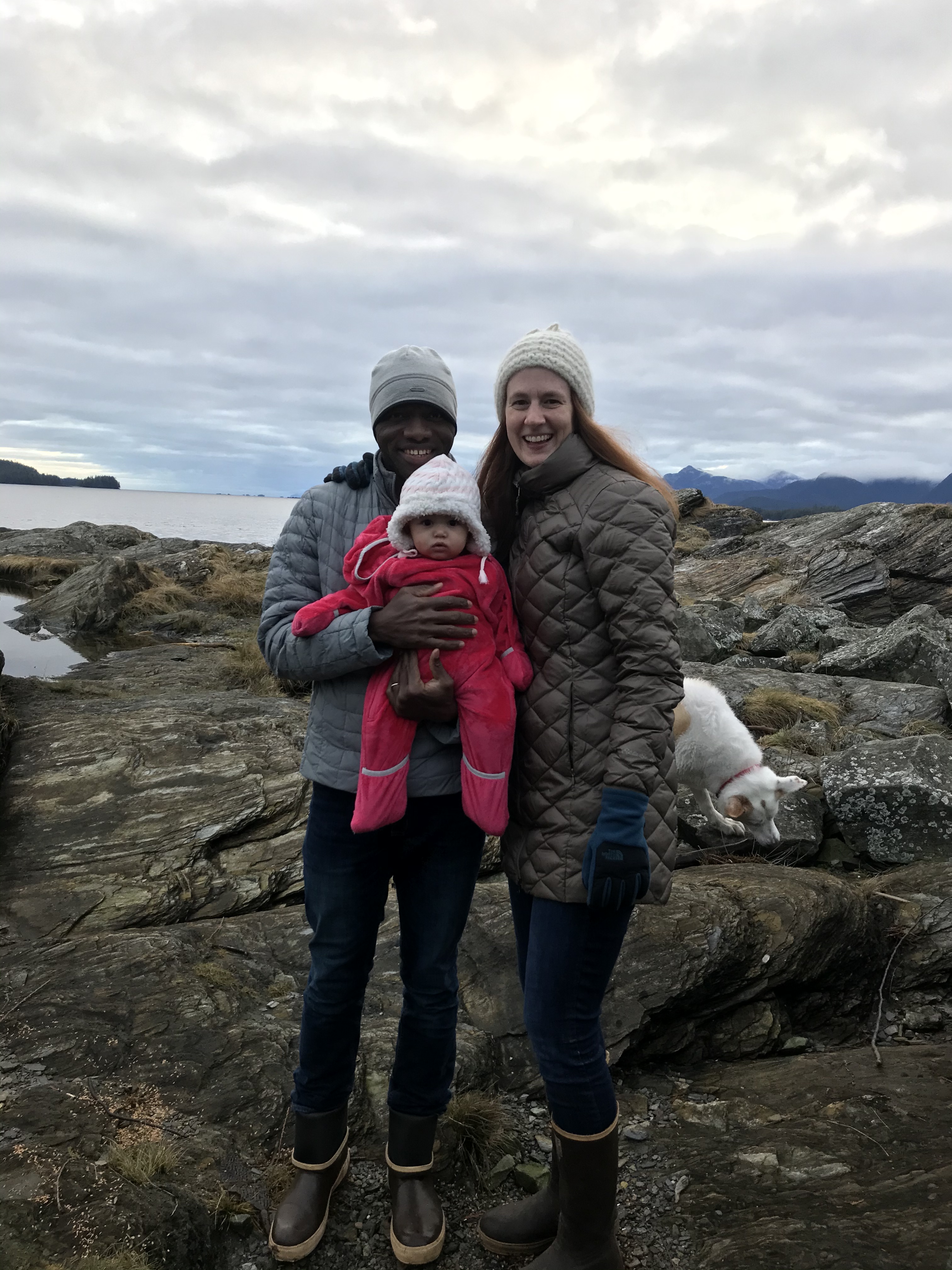 M4 Kate Osei-Bonsu’s health care experiences in her home state of Alaska, along with giving birth to her first child two weeks after completing her M3 year rotations and the Step 2 exam, solidified her desire to become an OB-GYN caring for underserved populations. Here, she and her husband are pictured with their daughter.

Growing up in the remote rural town of Ketchikan, Alaska, the Class of 2020's Kate Osei-Bonsu recalls the dearth of doctors in the area. As a child, she had tubes in her ears and, once a month, traveled an hour and a half by plane to Seattle to see an ENT specialist because one wasn’t available closer to home.

“There was always a need for doctors, so that got me interested in the health care field,” she says.

Osei-Bonsu worked first as a registered dietician, but the desire to go to medical school and bridge the gap in rural health care remained, especially when she thought of specializing in obstetrics and gynecology.

“It just encompasses so much,” she says. “Any direction you want to go in your career, OB-GYN has it, from providing primary and preventative care in the outpatient setting to doing technically complex robotic procedures in the operating room.”

Osei-Bonsu especially enjoyed her M3 OB-GYN rotation, which she finished while pregnant. Many of the patients she worked with spoke Spanish, but their shared experience proved a help.

“Being pregnant was a really fun way to connect with patients across cultures,” she says.

Soon, she knew, she would step into the patients' shoes.

Two weeks after completing her M3 year rotations and Step 2 of the national licensing exams, Osei-Bonsu gave birth to her first child. At first everything seemed to go smoothly, but then she experienced a postpartum hemorrhage, a fairly common, though potentially dangerous, complication. She tried to remain calm for her sake, as well as for her husband (also a physician, who later told her he was terrified) and their baby girl.

“Postpartum hemorrhage is the No. 1 cause of maternal mortality around the world, which is so sad because there are a lot of interventions that can be done to save lives,” she says. “I was nervous because I knew what could happen if they couldn’t stop the bleeding, but at the same time I knew I was in the right place.”

Osei-Bonsu spent her M3 and M4 years on the VCU School of Medicine’s Inova Campus in Northern Virginia, where she met a trio of OB-GYNs who've shaped her path. From mentor Francine McCleod, M.D., to clerkship director Emily Marko, M.D., and associate dean Samantha Buery-Joyner, M.D., they made a big impact on Onsei-Bonsu's experience.

“Dr. Marko has this enthusiasm that is just infectious,” Osei-Bonsu says. “She makes you love whatever topic she’s talking about. And I remember working with Dr. Buery-Joyner in the operating room and she was just such an incredible teacher.”

Marko thinks just as highly of Osei-Bonsu, whom she calls an exceptional student.

“She is incredibly smart, clinically gifted, compassionate and a really tough woman,” Marko says. “She had a baby during her third year of medical school and is still on track to finish on time, without having missed any rotations.”