The Secret Lives of Scientists

It might not be the most intuitive combination, but it turns out that nothing quite suits a white coat like dancing shoes.

It might not be the most intuitive combination, but it turns out that nothing quite suits a white coat like dancing shoes.

No one knows that better than Rita Shiang, Ph.D., who for years has switched between the two with ease. By day the associate professor of human genetics is director of the graduate program for the School of Medicine’s Department of Human and Molecular Genetics. At night and on weekends she’s one of the most active members of Richmond’s thriving lindy hop scene. Whether she and her husband are organizing dance workshops, cutting a rug in “lindy exchanges” around the globe or just dancing cheek to cheek on a Saturday evening, Shiang is as comfortable in a vintage frock on the dance floor as she is in a lab coat with a pipette in hand.

“My number one favorite is Blue Skies,” says Shiang, whose selected songs lend themselves to the different types of dances of the era: Lindy Hop; Charleston; and Balboa. “I noted the version I like because most of these songs have been recorded many times by many artists. The artists are a mix of bands from the era as well as contemporary bands that play this type of music – some of them we’ve had in Richmond to play for dancers.”

As the scientific and medical communities grapple with mounting concerns about burnout, some professionals hoping to make changes on an individual level are looking outside of the academy for solutions. And a “secret life” like Shiang’s, rarely glimpsed in the laboratory, may be one way to rebalance the work-life scales.

After all, while science may give meaning and shape to a life, as Duke Ellington said, “It don’t mean a thing if it ain’t got that swing.”

For Shiang, the decision to actively cultivate interests outside of work was a conscious one, made during her postdoc years as she refined her understanding of both human genetics and what a life in the sciences looks like. It’s a commitment that she’s maintained despite – or perhaps because of – the intensity of her research, which currently focuses on the identification of genes that cause diseases such as the premature fusion of cranial structures known as craniosynostosis.

I’m Beginning to See the Light ♫

Just as no dancer promises every dance of the night to one partner, first-year graduate students entering VCU’s Biomedical Sciences Doctoral Portal have the chance to investigate six available research tracks before committing to one in their second year.

In preparing students for that choice, Shiang is “one of the go-to people,” says the medical school’s Assistant Dean for Graduate Recruitment and Admissions Roxann Roberson-Nay, Ph.D. Besides mentoring three to five students per year, “she always has a finger on the pulse of what’s happening.”

To Shiang, helping the next generation of scientists adjust to the rhythm of their new life is only natural: “Because I have knowledge about how to get from one place to another,” she says, “I always want to share that knowledge.”

Puttin’ on the Ritz ♫

Outside the lab, Shiang easily assumes a different identity: as one half of “The Usual Lindy Suspects,” the moniker she and her husband dance under on the lindy scene. In this role, Shiang likes to don vintage clothes that she says “reflect the music of the swing era as well as when the dance was at its most popular.”

Shoes, such as these from a small vintage shop in New York City, are bought to match particular outfits but must have leather soles. This footwear may allow Shiang to remain not only light of step, but light of heart: “When you’re dancing, it’s a totally different mindset,” she says. “We could achieve world peace if we could get everyone to lindy hop.”

All the Cats Join In ♫

Shiang never shies away from a chance to dance. She and her husband regularly host lindy workshops and founded Richmond’s Jammin’ on the James celebration of swing-era music and dance 17 years ago. Further leaning into her love of the era when lindy hop rose to prominence, Shiang also helped found the Art Deco Society of Virginia, for which she still serves as a board member.

To Shiang, encouraging outside interests isn’t just a matter of personal satisfaction; it’s a vital element in preserving the future of the profession. “If we want good scientists to stay in science and in academics, we have to move toward balance,” she says. 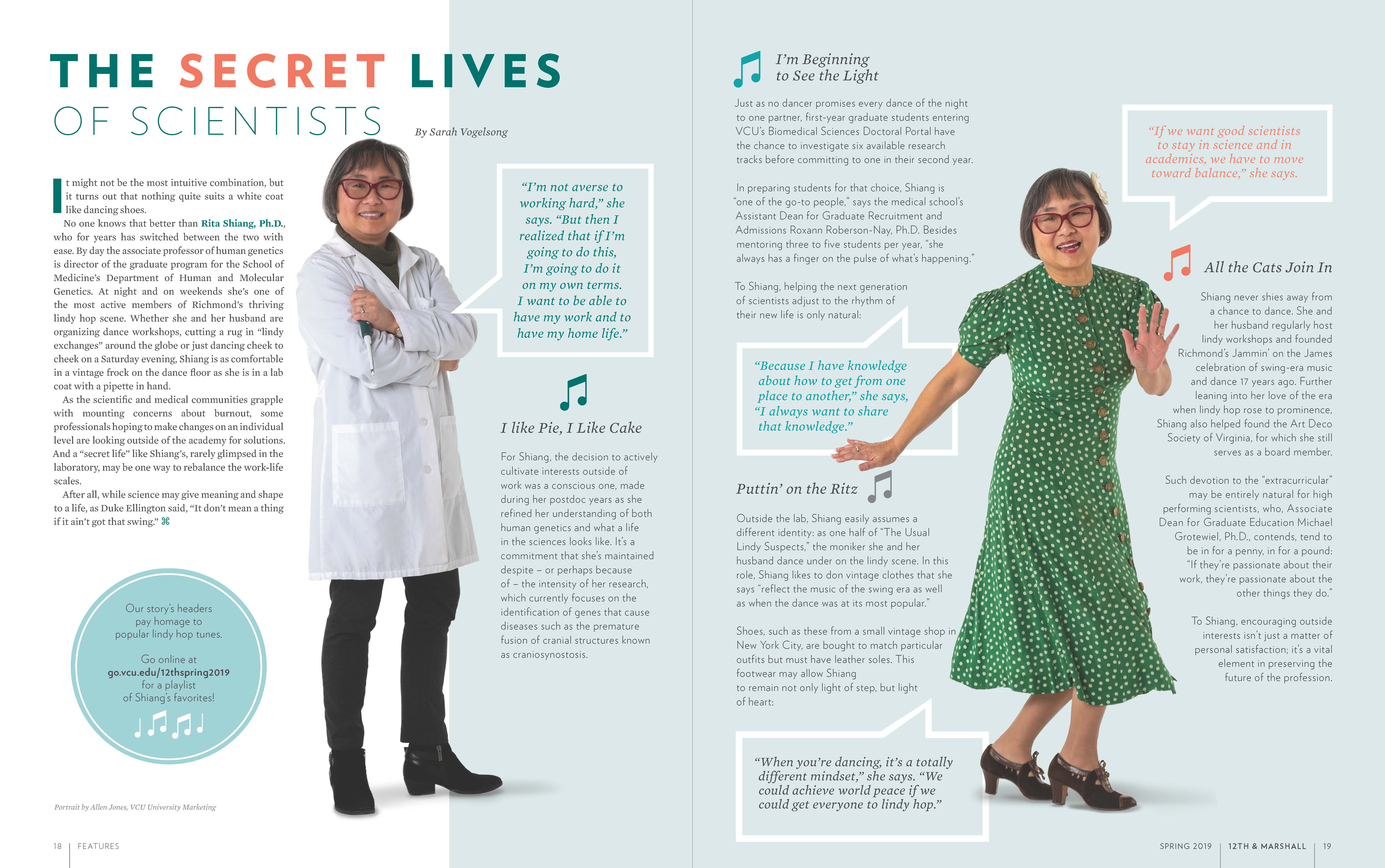