“You have to listen to the complaint, make a diagnosis and fix it.”

Andrew DelSordo, M’69, is having the time of his life restoring antique clocks.

“For me, it’s a combination of the aesthetic appreciation of a work of art, as well as the mechanical part of it,” says the retired family medicine physician. “There is great satisfaction in getting something to work that wasn’t working before.”

Since the 1990s, DelSordo has restored hundreds of antique clocks. His favorite is the grandfather clock, also called the longcase or tall-case clock. But he also enjoys bringing pillar and scroll, mantel and English bracket clocks back to their former glory.

Made primarily by English and American craftsmen, these clocks were popular from the early 1700s to the mid-1800s. DelSordo owns several, including a 1790 tall-case clock crafted by English clockmaker Richard Keyte.

“It’s hard to believe what these men made in their shops with simple tools,” DelSordo says. “It’s so intriguing to me.” 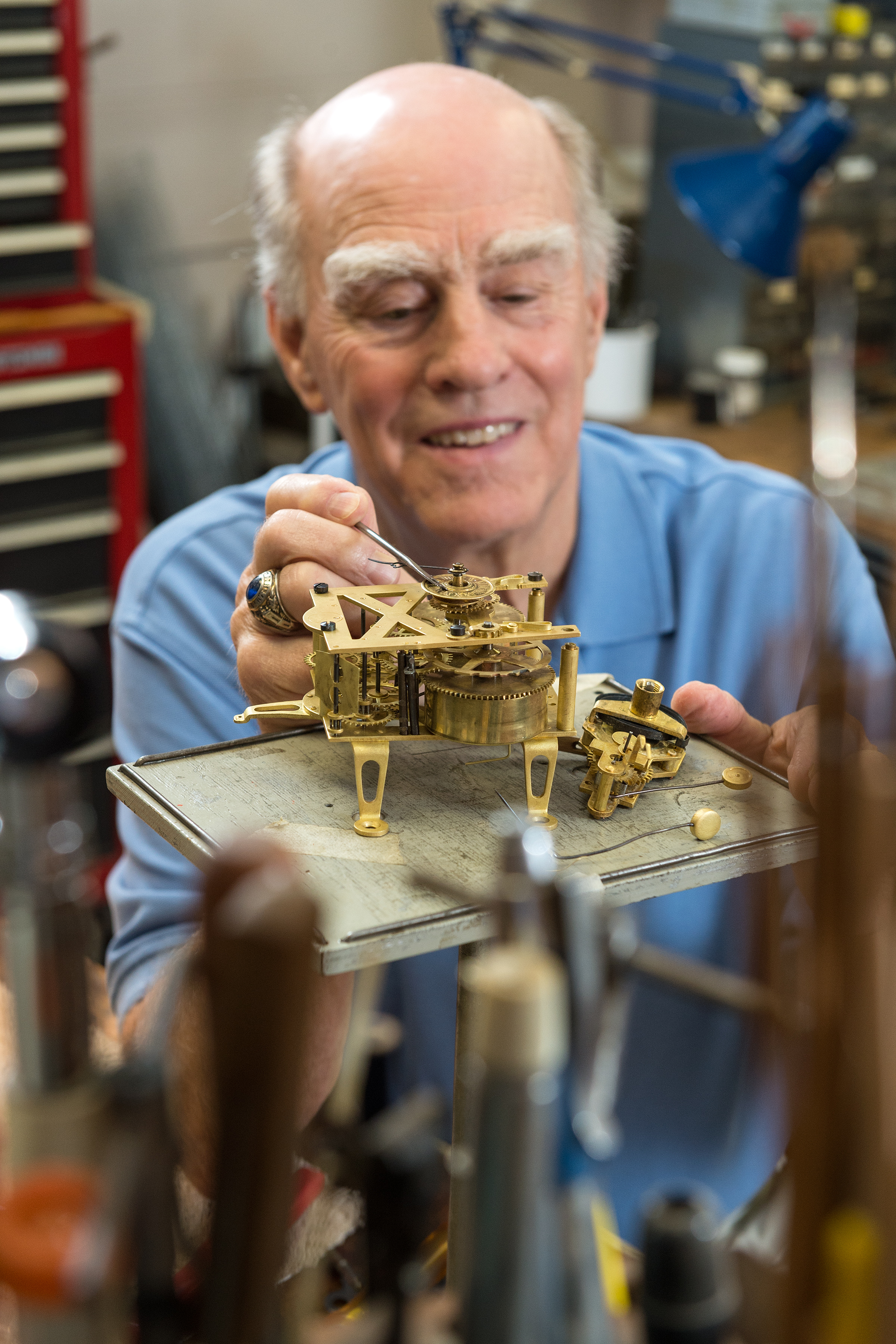 If it weren’t for his Richmond, Virginia, neighbor and friend, Mel Farquhar, DelSordo would not know a thing about clock gears or bushings. Farquhar invited him to tour his workshop in 1990, and DelSordo was mesmerized.

“He had a queue of clocks waiting, and I jokingly said, ‘Mel, you need an apprentice!’” DelSordo recalls. “He asked if I was interested. I was!”

For the next seven years – when he wasn’t treating patients – DelSordo was by his friend’s side learning the craft. When Farquhar passed away in 1997, DelSordo continued down the path Farquhar had led him.

“I always say that my father prepared me for the first half of my life and Mel the second,” DelSordo says.

Today, DelSordo has two apprentices of his own.

“I feel it is my responsibility to pass along what my mentor gave to me,” he says.

Growing up in Latrobe, Pennsylvania, DelSordo knew from an early age he wanted to be a doctor. But it wasn’t until his senior year of medical school that he zeroed in on family medicine.

“What really hit me was the impact you could have on a family,” he says. “It’s a special experience to get to know and care for an entire family for generations. These people let you into their hearts. It’s difficult to describe that feeling, but it is very special.”

DelSordo set up private practice in Richmond in 1972 and five years later joined the Department of Family Medicine faculty at VCU – where he helped establish the School of Medicine’s Chesterfield Family Medicine Residency – until 1984. He continued in private solo practice until retiring in 2003.

“I look back on my career somewhat humbly,” he says. “You create a bond with people. You don’t get that in a lot of occupations.”

He continues to use his medical skills in the workshop.

“There are a lot of parallels,” he says. “You have to listen to the complaint, make a diagnosis and fix it.”

The best part, he says, is returning a precious piece of family history that has been passed down for generations.

“Clients often share how they remember their grandmother winding it or how their grandchildren today will watch the gears turn,” DelSordo says. “I don’t care if it’s a $50 clock or a $20,000 one. It’s the sentimental attachment they hold that’s important. They all have stories to tell.”