Each year, the incoming students assemble in the historic Egyptian Building for Roll Call.

Each year, the incoming students assemble in the historic Egyptian Building for Roll Call. This year’s 216 students were chosen from an applicant pool that topped 9,000, the largest in the school’s history. The week’s orientation activities culminate with the White Coat Ceremony, where the students donned their first white coats and heard from the Class of 1999’s Richard Bennett who’s now a pediatrician in Richmond.

Their next stop was Boot Camp’s vital signs workshop that taught them the basics of blood pressure, heart rate and respiratory rate. As the week went on, they learned how to take a patient history and the head to toe physical exam. 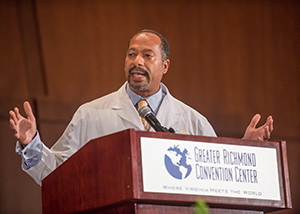 Unexpected advice delivered at the right time transformed the perspective of Richard Bennett, M’99. It came from three mentors: first his mother, then a favorite cardiology professor and later Michelle Whitehurst-Cook, M’79, H’82. They all happened to have the same message: enjoy medical school.

Bennett was the keynote speaker at this year’s White Coat Ceremony, the annual event that welcomes a new class of students into the School of Medicine. And while his advice may sound easy to follow now, it’s something that’s just as easy to lose sight of in the stress and hard work of being a medical student.

Bennett recalled for his audience the three separate times he was reminded to enjoy medical school. The first was when he was accepted by the School of Medicine. His mother, Lillie Bennett, M.D., a Richmond-area pediatrician, told him, “Now that you’re going into medical school the opportunities are endless. You can pursue any kind of knowledge or skill. But don’t forget to enjoy it.”

Bennett, who had been expecting a lecture on the long hours of study required to succeed in medical school, was shocked. For the first time he realized that he had made it, and the opportunity was his to take advantage of.

The second time he heard the refrain, the joy of being accepted into the School of Medicine was far behind him. He had just been to Sanger Hall, where he learned that he had failed a cardiology exam. Downtrodden, Bennett was walking down Marshall Street when his cardiology professor caught up with him. Instead of telling Bennett he needed to study harder, the professor simply asked if everything was ok.

Bennett realized that the professor had a personal interest in seeing his students succeed, and he couldn’t have been too surprised when he heard the familiar refrain: “This is the last time in your life that your only focus will be on learning. Enjoy studying. Enjoy cardiology. Enjoy med school.”

The third time he heard the message came after his time as a medical student was over. He was listening as Whitehurst-Cook, now the School of Medicine’s associate dean of admissions, was speaking to the incoming class of medical students. Usually cheerful, her talk turned uncharacteristically stern. “The competition is over,” she said. “I know that you had to fight for your place at the school, but that ends now. Be friends. Be colleagues. Enjoy medical school.”

Bennett reflected on the importance a community of people who encourage each other to pursue new interests and seek new knowledge. The new medical students were there to learn, struggle and succeed together, and they might as well enjoy the camaraderie.

Chances are good that the Class of 2019 will hear Bennett’s advice repeated during their time here, and at times they will lose sight of it through the fray of important exams and long nights spent studying. Bennett knows, however, that a simple message, delivered at the right time, can make a world of difference.

From the White Coat Ceremony, to the official class photo to their first vital signs workshop, the 216 incoming students in the Class of 2019 got a whirlwind welcome to the world of white coats. Photos by Kevin Schindler, Allen Jones and Tom Kojcsich.