Music and medicine: a playlist for life

Anyone who tells you they don’t get nervous when stepping onstage to sing for a crowd is lying, laughs Tricia Coughenour of the Class of 2021. Over time, though, “it affects you less,” she says. “You use it as a charge.”

Anyone who tells you they don’t get nervous when stepping onstage to sing for a crowd is lying, laughs Tricia Coughenour of the Class of 2021. Over time, though, “it affects you less,” she says. “You use it as a charge.”

Coughenour knows the feeling well, as she’s been singing and performing since she was 8 years old. Before arriving on the MCV Campus, she sang for four years as a member of the University of Virginia’s oldest coed a cappella group, The New Dominions. She has auditioned for Disney productions and TV’s “American Idol.” As a fourth-year undergraduate, she performed the lead role of Cosette in “Les Miserables” five nights a week for a two-month run – including a rehearsal attended by the musical’s renowned composer, Claude-Michel Schönberg.

Still, this classically trained singer felt more nervous than usual when she sang the national anthem a cappella at last spring’s VCU School of Medicine Hooding Ceremony. “It was an honor to be asked,” Coughenour says. “It’s a group I really respect … and the pressure was on to show that they didn’t make a mistake in asking me.”

The occasion felt momentous. “I teared up a few times,” she remembers. “It’s an incredible moment to witness someone take a couple of steps across a stage and literally become a doctor.” 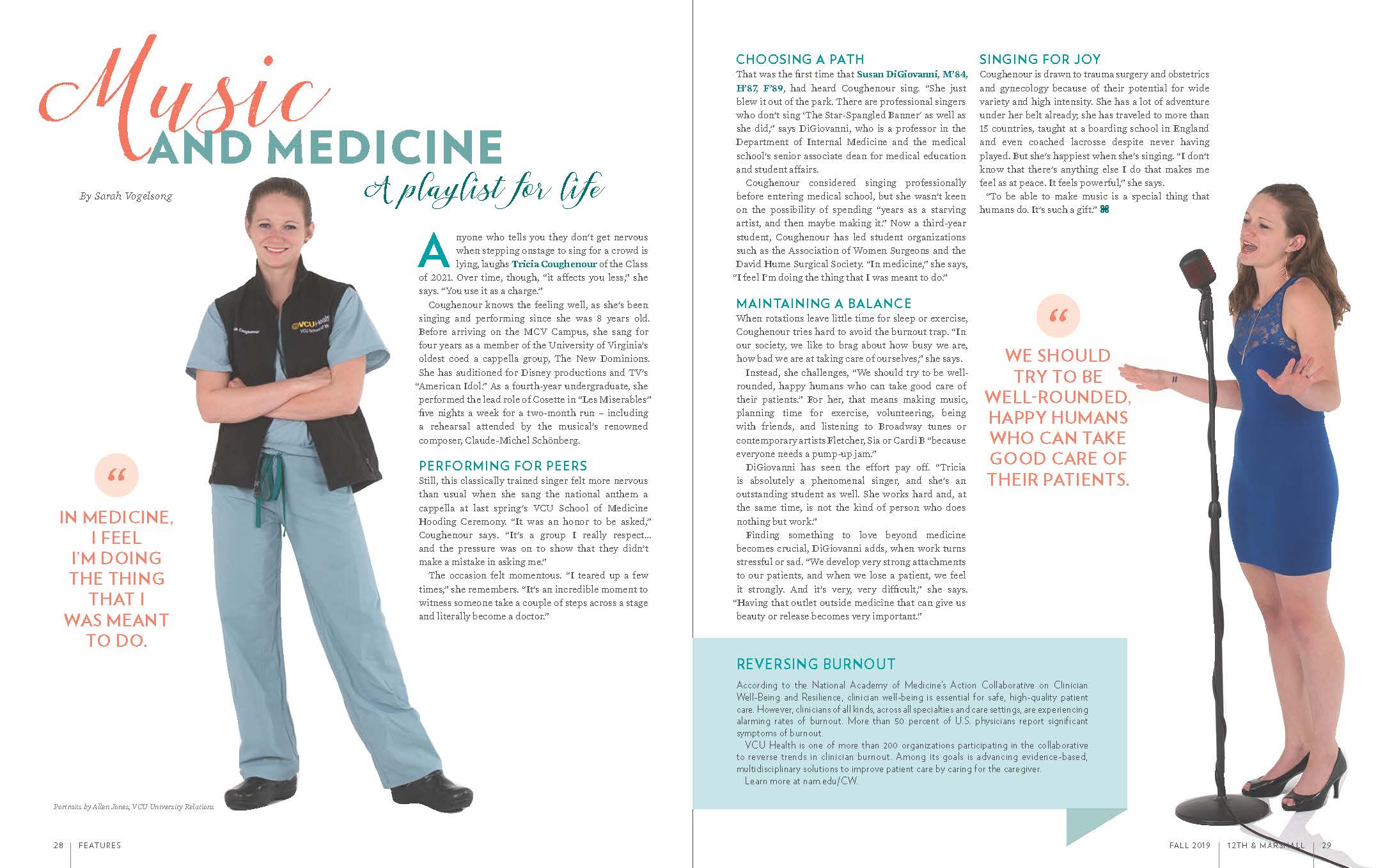 That was the first time that Susan DiGiovanni, M’84, H’87, F’89, had heard Coughenour sing. “She just blew it out of the park. There are professional singers who don’t sing ‘The Star-Spangled Banner' as well as she did,” says DiGiovanni, who is a professor in the Department of Internal Medicine and the medical school’s associate dean for quality improvement and LCME accreditation.

Coughenour considered singing professionally before entering medical school, but she wasn’t keen on the possibility of spending “years as a starving artist, and then maybe making it.” Now a third-year student, Coughenour has led student organizations such as the Association of Women Surgeons and the David Hume Surgical Society. “In medicine,” she says, “I feel I’m doing the thing that I was meant to do.”

When rotations leave little time for sleep or exercise, Coughenour tries hard to avoid the burnout trap. “In our society, we like to brag about how busy we are, how bad we are at taking care of ourselves,” she says.

Instead, she challenges, “We should try to be well-rounded, happy humans who can take good care of their patients.” For her, that means making music, planning time for exercise, volunteering, being with friends, and listening to Broadway tunes or contemporary artists Fletcher, Sia or Cardi B “because everyone needs a pump-up jam.”

According to the National Academy of Medicine’s Action Collaborative on Clinician Well-Being and Resilience, clinician well-being is essential for safe, high-quality patient care. However, clinicians of all kinds, across all specialties and care settings, are experiencing alarming rates of burnout. More than 50 percent of U.S. physicians report significant symptoms of burnout.

VCU Health is one of more than 200 organizations participating in the collaborative to reverse trends in clinician burnout. Among its goals is advancing evidence-based, multidisciplinary solutions to improve patient care by caring for the caregiver.

Learn more about this topic >>

DiGiovanni has seen the effort pay off. “Tricia is absolutely a phenomenal singer, and she’s an outstanding student as well. She works hard and, at the same time, is not the kind of person who does nothing but work.”

Finding something to love beyond medicine becomes crucial, DiGiovanni adds, when work turns stressful or sad. “We develop very strong attachments to our patients, and when we lose a patient, we feel it strongly. And it’s very, very difficult,” she says. “Having that outlet outside medicine that can give us beauty or release becomes very important.”

Coughenour is drawn to trauma surgery and obstetrics and gynecology because of their potential for wide variety and high intensity. She has a lot of adventure under her belt already; she has traveled to more than 15 countries, taught at a boarding school in England and even coached lacrosse despite never having played. But she’s happiest when she’s singing. “I don’t know that there’s anything else I do that makes me feel as at peace. It feels powerful,” she says.

“To be able to make music is a special thing that humans do. It’s such a gift.”