Two MCV Campus researchers are making significant headway in the development of a novel multi-pathogen based vaccine that will protect people from Lyme disease and other tick-borne illnesses. 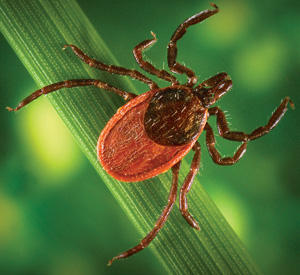 Two MCV Campus researchers are making significant headway in the development of a novel multi-pathogen based vaccine that will protect people from Lyme disease and other tick-borne illnesses.

Jason A. Carlyon, PhD’99, associate professor of microbiology and immunology, and Richard T. Marconi, Ph.D., professor of microbiology and immunology, were graduate student and mentor at VCU back in the 1990s, working on Lyme disease only a decade after ticks were confirmed as transmission vectors. “Jason was an outstanding student and the first to earn a Ph.D. In my lab,” Marconi says.

Carlyon headed to Yale to do a postdoctoral fellowship and then went on faculty at the University of Kentucky. During that time he took a different path than his advisor and established a research program on granulocytic anaplasmosis — another tick-borne disease.

“It’s an emerging disease, transmitted by the same ticks that carry Lyme,” Carlyon says. Indeed, the two diseases can be co-transmitted. Long known as a veterinary disease, it sickens horses, sheep and domestic animals. In the mid-1990s the first human cases were confirmed. Since then the number of reported cases has increased every year and now runs in the thousands.

In the meantime, Marconi continued his focus on the pursuit of new preventive strategies for Lyme disease. His laboratory developed a canine Lyme disease vaccine that has been patented, licensed and is now undergoing USDA field safety trails.

Lyme disease in the clinic:

There’s controversy in the medical community on how to diagnose and manage Lyme disease, says Gonzalo Bearman, M.D., professor of medicine and chair of the division of infectious diseases. He follows the guidelines set by the US Center for Disease Control and Prevention and the Infectious Diseases Society of America. (Different guidelines have been put forth by the International Lyme and Associated Diseases Society.)

When should you test for Lyme disease?

It’s based on symptoms and likelihood of exposure to ticks, Bearman says. If a primary care physician is not sure how to interpret serology, they should consult with an infectious disease specialist.

The Marconi lab is now aggressively working to modify the vaccine and tailor it specifically for use in humans. Lyme disease infects an estimated 300,000 people a year according to the US Centers for Disease Control and Prevention, with most of those cases occurring in the Northeast, the Mid-Atlantic and the Midwest.

While a human Lyme disease vaccine was briefly available in the United States, it was voluntarily pulled from the market by the manufacturer in 2002 after concerns about potential serious side effects were raised. Marconi says his vaccine — which targets the three primary bacterial species that cause Lyme disease in North America and Europe (Borrelia burgdorferi, B. garinii and B. afzelii) — differs from the previous one in several important ways.

“The life cycle of the Lyme pathogen goes from ticks to mammals to ticks,” Marconi says. “Those are radically different environments and the bacteria changes the proteins on its surface in response to changes in their environment.”

When it’s in the gut of a tick, the bacteria produces OspA. The old vaccine was reasonably effective — although it required three shots for year-long protection —antibodies in the blood killed the bacteria in the tick during a blood meal. 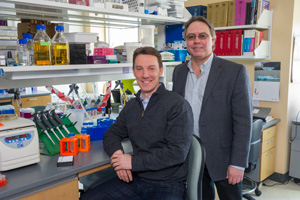 There’s another distinguishing feature of Marconi’s vaccine that’s based on years of painstaking research identifying the precise features of OspC that trigger the immune system to make antibodies. “We conducted extensive epitope mapping analyses,” he says, and identified two regions of the protein that elicit bacteridical antibody responses — “antibodies that will kill the bacteria.” The vaccine contains only those segments, not the whole protein.

Because the Lyme disease spirochetes and OspC are highly variable, Marconi designed his vaccine to contain protein segments from a large set of OspC variants. His novel OspC epitope based chimeric vaccine has the potential to provide protection against diverse strains from both North America and Europe.

Human granulocytic anaplasmosis (HGA), Carlyon’s research interest, can resemble Lyme disease, causing flu-like symptoms such as fever, body aches, headache and malaise, although there is no rash. In severe cases, decreases in white and red blood cells can occur, as well as liver damage, shock and seizures. “Death is rare, but can occur,” Carlyon says.

The pathogen — Anaplasma phagocytophilum — is very different however. It’s an intracellular bacterium that finds, binds and enters a type of white blood cell called a neutrophil.

Carlyon has spent the last 15 years studying the molecular mechanism of how the bacterium invades the host cell. He’s learned the bacteria’s surface proteins bind to a neutrophil receptor, somewhat akin to a key in a lock that is the first step to entry. Carlyon’s team has proven that antibodies to the bacterial keys prevent them from opening the host cell’s lock to block invasion.

Working with his former advisor and now collaborator, Carlyon has performed epitope mapping on the bacterial keys and identified the specific region of each that is necessary for function.

And, as in Lyme disease, the proteins he’s targeting get turned on during transmission. “When the tick starts feeding, signals in mammalian blood turn on the key,” Carlyon says. “The pathogen readies itself for the mammalian host.”

Now that they are reunited on the MCV Campus, Carlyon and Marconi have landed pilot funding from the Virginia Innovation Partnership to develop a broad protection vaccine that would contain segments of proteins from both Borrelia and Anaplasma. This highly novel “multi-pathogen” vaccine could be used to immunize and protect people against both Lyme disease and HGA. The researchers are currently seeking both federal support and the support of private investors to bring their new vaccine to the market.

By Jill U. Adams