It was front-page news out of NYU Langone Health in August 2015. In a 26-hour operation, the face of a 26-year-old bike mechanic who was declared brain-dead after a cycling crash was transplanted onto a 41-year-old former firefighter who was severely burned in the line of duty.

It was front-page news out of NYU Langone Health in August 2015. In a 26-hour operation, the face of a 26-year-old bike mechanic who was declared brain-dead after a cycling crash was transplanted onto a 41-year-old former firefighter who was severely burned in the line of duty. 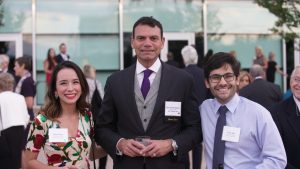 Leading the team that performed the most extensive facial transplant ever was M’99 Eduardo D. Rodriguez, M.D., D.D.S., the Helen L. Kimmel Professor of Reconstructive Plastic Surgery and chair of the Hansjörg Wyss Department of Plastic Surgery at NYU Langone. The painstakingly delicate surgery was a resounding success.

“However, I’ve always had an interest in finding solutions to difficult problems, and this pursuit has led me to the position in which I currently reside,” he says.

Rodriguez recently returned to Richmond to be honored at the 2017 Alumni Stars ceremony, a biennial event that celebrates alumni from across the university’s academic units for their extraordinary personal and professional achievements. During the event, Rodriguez met the Class of 2019’s Diana Otoya, who says she was encouraged by Rodriguez’s non-traditional path to medical school.

“I confessed to him I didn’t really know what I wanted to do yet,” Otoya says. “He made me feel comforted by his own story about starting in dentistry before even thinking about medical school. He gave me reassurance that there is no path that is set in stone and that our careers are fluid.”

Rodriguez and his team at NYU Langone are planning for future reconstructive procedures while expanding the face transplant program’s clinical, research and education/training efforts.

“Clinical efforts will focus on patient selection and achieving the most optimal aesthetic and functional results,” he says. “Research efforts are focused on improving immune surveillance and designing patient-specific targeted immune therapies to lessen drug toxicity without increasing risk of transplant rejection.”

Peter F. Buckley, M.D., dean of the VCU School of Medicine, praised Rodriguez’s work. “He brings hope to patients in the most difficult of circumstances and I have no doubt he will continue to transform countless lives,” Buckley says. “I’m proud to see him receive this alumni honor and grateful we can call him one of our own.”

Rodriguez, the son of Cuban immigrants, was born and raised in Miami. His road to VCU began with undergraduate education at the University of Florida followed by a dental degree from NYU College of Dentistry. He completed a residency in oral and maxillofacial surgery at Montefiore Medical Center/Albert Einstein College of Medicine before enrolling at VCU, where he earned his medical degree in 1999.

“I was fortunate to have been part of a newly designed education curriculum there and certainly received the best medical education at VCU,” he says.

In addition to pioneering clinical achievements, Rodriguez has written more than 130 articles and 21 book chapters. He is a member of numerous national and international professional societies, and he was the Dawson Theogaraj visiting professor in plastic surgery on VCU’s MCV Campus in 2016.

Rodriguez is quick to share credit for his accomplishments and accolades.

“I am lucky to have been mentored by remarkable individuals, and along the way, I have worked hard but have enjoyed every moment,” he says. “I have learned from the most challenging moments, and that is why one must always look forward and never give up.