All work and no play can make medical students ripe for burnout. History tells us that activities away from the hospital can not only ease stress, but provide new opportunities for lasting friendships.

All work and no play can make medical students ripe for burnout. History tells us that activities away from the hospital can not only ease stress, but provide new opportunities for lasting friendships. 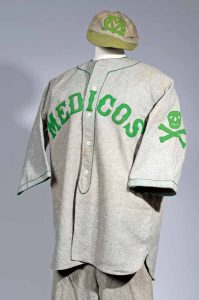 An MCV baseball uniform from the 1930s is a new addition to the medical artifact collection of Tompkins-McCaw Library’s Special Collection and Archives. Photography by: Kevin Schindler

At the turn of the 20th century, one of the most popular outlets for students was sports. The MCV Campus was fielding a baseball team, dubbed the Medicos, as early as 1907. The recreational team continued competing through 1956.

“Medical students put in so much work in the classroom, it’s easy to forget that they had and continue to have a life outside of that,” says Andrew Bain, who manages the medical artifact collection of Tompkins-McCaw Library’s Special Collection and Archives. “Sports were an important part of student life.”

For the first time, the school will be able to share that story. In May, a Medicos baseball uniform worn by left fielder Earle Carlton Gates, M’32, was donated to Tompkins-McCaw. While the library houses about 6,000 artifacts, including about 100 textiles, this is the first athletic uniform worn by an MCV student.

“We have lots of nurses’ uniforms, but to have something that represents a different aspect of student life is truly special,” Bain says. “This represents a whole new dimension.”

Gates, who was from Highland Springs, Virginia, graduated from the University of Richmond before entering medical school. He also received a master’s degree at Johns Hopkins University. A captain in the Army Reserves, he was serving as the chief of medical and surgical service at Central State Hospital in Petersburg when he passed away at the age of 60 in 1968.

His uniform includes a wool baseball cap, wool jersey and pants, and two pairs of socks. On the front of the uniform is the name of the team, along with an embroidered skull and bones patch on the sleeve. There is also a bulkier wool sweater, which Bain says was probably not part of the uniform but was worn by Gates.

You can check out this piece of the past for yourself. It will be on display in the Pastore Memorial Exhibit Hall on the first floor of the Tompkins-McCaw Library through Reunion Weekend in April.

“All pieces of the uniform are in excellent shape, which is unusual for textiles,” Bain says. “Typically they don’t stay stable because they are made of organic material and are subject to the ravages of bugs and hot and cold.” This find, then, is especially important, Bain says, because so few have survived.

“It’s not a big shock that this is the first of its kind in our collection,” he says. “After students graduated and left, they really didn’t have a need for their uniforms, so they just discarded them. To find one, that’s extraordinary. We can’t wait to showcase it.”

Don Richardson, M’76, discovered the uniform at an estate sale in his Norfolk neighborhood earlier this year. He immediately contacted the medical school.

Richardson, an associate professor of medicine at Eastern Virginia Medical School, was especially thrilled with the find because of his family’s ties to the MCV Campus. His father, David Richardson, H’55, was on faculty for more than 30 years and served as chairman of the Division of Cardiology from 1972–86.

“I grew up here at MCV, so this has special meaning,” the younger Richardson says. “But everyone can enjoy this piece of history. We can all learn from it. I had no idea MCV even had a baseball team.”

The Medicos, also referred to as the “Sawbones,” were not a very good team during Gates’ era. College yearbooks feature photos of the team and point out, “Since this is a professional school, many capable men can spare no time for baseball. Even those who love the sport dearly enough to indulge occasionally are handicapped by the lack of time to practice.” In 1931, playing against such teams as Bridgewater, William and Mary, the University of Delaware and Randolph-Macon, they finished 1–5. “There obviously was no correlation between being a good medical student and being a good athlete,” Bain jokes.

Baseball was not the only popular sport during the early 1900s. MCV also fielded football, basketball, tennis and golf teams. The women’s basketball team was known as the “Sawbonettes.”

“We don’t have a lot of information on the teams, other than the little bit we see in the yearbooks,” Bain says. “That’s the curse of social history. People don’t always leave us much about their everyday lives. They don’t think it’s interesting, so it’s left up to us to fill in the blanks as best we can.”