History in the Making

Across American history, many great journeys and success stories have unremarkable beginnings – you might say they started on the ground floor. 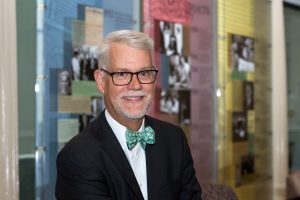 Across American history, many great journeys and success stories have unremarkable beginnings – you might say they started on the ground floor. For John F. Butterworth IV, M’79, there’s a twist to that concept.

Butterworth has a deep personal history with the School of Medicine, which is  celebrating its 180th anniversary this year. It goes beyond his past as a student or his resent as chair of the Department of Anesthesiology that’s now marking the 50th year  since its founding.

But there is still more to the story. Well before he ever set foot in the anatomy lab, one of his early childhood memories took shape in a more modest part of the MCV Campus, when his father was a resident in orthopaedic surgery. “I can remember as a little kid, when my father was a house officer, eating dinner with him in the basement of what was then known as Hunton Hall at the corner of 12th and Marshall streets,” Butterworth says. “My mother tells me that the three of us could eat at a discount on Sundays. The medical center has been a part of my life – almost since the time I was born – and ever since.”

It was on that foundation that Butterworth, 64, began to build his own personal journey. Decades later, he is still building that legacy, helping to usher his department into the next generation of health and medicine. In particular, as anesthesiology chair, he’s serving as a pioneer in the increasingly complex world of pain management.

THE PAST
Butterworth weighed a few different career possibilities before choosing VCU. Ultimately, his family tradition and the early experiences he had on the MCV Campus pointed him toward the School of Medicine. 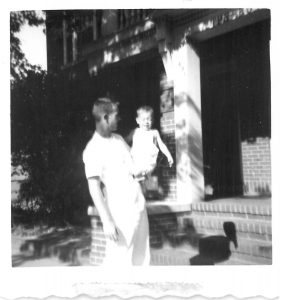 “I changed my direction from basic science research to medicine because of good advice from a mentor and my particular skill set,” Butterworth says. “Another reason I chose to come here was the tradition, because my father came here, along with some of my other family members.”

A Richmond native, Butterworth is a student of history when it comes to VCU, its MCV Campus, the Department of Anesthesiology and the city that surrounds them all. He’ll tell you, for example, about surgeon Charles Bell Gibson, M.D., a faculty member on the MCV Campus, who in 1848 became the first physician to use anesthesia in Virginia.
More recently, as Butterworth worked his way through medical school, major changes unfolded around him. Those changes, he says, are reflected in the faces of the school and city he sees today.

“The population of Richmond and the School of Medicine is now more diverse by whatever measurement a person might wish to use compared to the era when I was a student,” Butterworth says. “There have been huge changes in Richmond. So much has changed for the better.”

Butterworth looks fondly on his time in the basement cafeteria and later in the hospital setting, when it gave him the chance to observe his father in a professional setting. There, Butterworth learned more about his father – and what it takes to be a good doctor.

“He could be gracious to almost anyone,” Butterworth recalls. “When he would walk through the hospital, he knew everyone’s name, from the nurses to the people who swept the floor. He wasn’t glad-handing; he was just nice to them. As a student I worked at one of the community hospitals where he did surgery. People liked to work with him. He was calm and reasonable. He just enjoyed medicine and orthopaedic surgery so much. It was very nice to watch a parent in the hospital that way. It had a real impact on me.”

After leaving the MCV Campus, Butterworth completed residency training at the Brigham and Women’s Hospital in Boston. He then spent time on the medical school faculty of Wake Forest University and as chair of the Department of Anesthesia at Indiana University before returning to the MCV Campus in 2011. 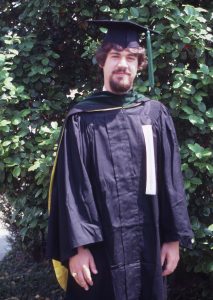 John F. Butterworth IV on graduation day in 1979, 27 years after his father earned his medical degree.

“It felt right to return to VCU,” Butterworth says. “I have all this history here, and Richmond will always be home.”

THE PRESENT
Just as it has shaped many other facets of modern life, technology has made its own imprint on medical education and medicine itself. As a physician and faculty member, Butterworth sees how technology affects all aspects of learning and clinical care.

The very nature of learning is fundamentally different since Butterworth earned his M.D. degree. Increasingly, coursework is moving away from a traditional format in which students absorb (but do not necessarily retain) large amounts of information in preparation for testing. Constant evolution in biomedical and clinical knowledge, combined with the proverbial informational fire hose that is the Internet, means more students are acquiring not just knowledge itself but the skills to continue as learners throughout the course of their careers. As for the system in which they will one day practice, students also are gaining more exposure to the technologies, such as electronic health records, that they will use on a daily basis.

“Just during the time I’ve been here, systems have evolved,” Butterworth says. “There is a difference in how people look up medical information, and how they use patient data within the electronic health record. Members of the anesthesiology department such as Dr. Paul Murphy and Dr. Pranav Shah assemble clinical data from our anesthesia records to help us improve quality.”

Social media is another pervasive technological force, and it’s another trend Butterworth says he embraces. Managing a medical school department’s Facebook page is a task some chairmen might feel comfortable leaving to others. Butterworth, however, jumps right in with enthusiasm over its reach and ability to connect colleagues and alumni with the department and one another.

“We use our departmental social media accounts to keep people up to date on what’s going on in the department,” Butterworth says. “It works much better than a web page, because people don’t check web pages every day, but we are used to checking social media. It’s a scrapbook of what everyone has been up to. We want keeping up with departmental news to become a part of someone’s regular routine.”

THE FUTURE
That willingness to engage with change is evident on a much larger scale in Butterworth’s work to improve the quality of patient care. With medical centers expanding emphasis on care outcomes and cost controls, quality and safety measures are more important all the time. Anesthesiology can play a key role in these kinds of efforts. A growing national focus on pain management across the care continuum is leading physician leaders to design new approaches that improve patient health and well-being and reduce the need for opioid drugs. “We are lucky to have Dr. Marc Huntoon to lead our pain programs,” Butterworth says.

“These days, you have to be a relentless improvement machine, and Dr. Butterworth is a great contributor to that,” orthopaedic surgery’s Zuelzer says. “He’s always looking for ways to promote quality, efficiency and accountability.”

Overall anesthesiology services on the MCV Campus have, by Butterworth’s estimation, expanded by about 5 percent each year since his arrival. The department also has gained national prominence under Butterworth, who is a member of the International Anesthesia Research Society board of trustees’ executive committee. 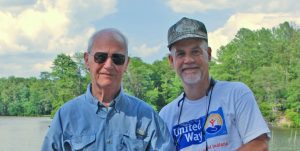 From lunches shared in Hunton Hall to days spent fishing on a lake, John F. Butterworth IV, M’79, absorbed lessons from his father and fellow alumnus. “He could be gracious to almost anyone.”

There are certain areas of clinical care in which VCU is leading the country. One of these is Enhanced Recovery After Surgery, an umbrella term for a bundle of strategies designed to promote earlier and better recovery after an operation. Michael Scott, M.B., Ch.B., in the Department of Anesthesiology leads those efforts at VCU.

Under optimal conditions, ERAS is a patient-centered approach that improves patient satisfaction, decreases length of stay and even reduces the use of pain medication (including opioids) after discharge.

“Our department has unusual strength in other areas, aside from ERAS, including regional anesthesia, cardiac anesthesia and interventional pain management,” Butterworth says. “The department is still evolving, but we’re in a pretty good place. Our graduates have a right to feel a certain sense of pride. We’re on the map now.”

In large part, the School of Medicine has one of its own, and the multigenerational history that inspired it, to thank for that.