Born and raised in Arecibo, Puerto Rico, the Class of 2020’s Gabriel Martinez Alvarez returned home in December 2017 with an interdisciplinary VCU team to provide care to the storm-ravaged island. He wrote about his experience for the Association of American Medical Colleges. In his own words:

Born and raised in Arecibo, Puerto Rico, the Class of 2020’s Gabriel Martinez Alvarez returned home in December 2017 with an interdisciplinary VCU team to provide care to the storm-ravaged island. He wrote about his experience for the Association of American Medical Colleges. In his own words:

It can be easy to become distracted from school if you let yourself. There are holidays, family gatherings, stocks, sports, social media; but nothing distracted me more from my studies than Sept. 20, 2017.

I come from a small town in Puerto Rico called Arecibo, where the sun shines bright, the ocean breeze is never far, the beat of the salsa music infuses the ground, the people are loud, and the food is always fried. It’s a combination of the flavors of Spanish culture mixed with the sounds of African culture. It’s vibrant, it’s friendly, and it’s home.

Much of my family still lives there and I always look forward to spending time at home. I was planning my trip for Christmas when I saw reports of Hurricane Maria headed toward Puerto Rico. I began to worry, and my thoughts went back to just two weeks prior when Hurricane Irma had just missed the island. Maybe Maria would do the same.

Helpless to a helper 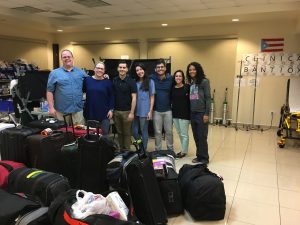 An interdisciplinary team including medical school faculty and students travels to Puerto Rico with donated supplies, ready to manage acute and chronic care needs for the island’s residents.

On Sept. 20, 2017, Hurricane Maria raged, plowing through my childhood memories, my culture, my people, and my island. It was the worst recorded natural disaster in Puerto Rico’s history. I could not turn off the news. I scrolled through Facebook, watching every video and reading every post I could find. Days after the hurricane and I still had no word from any of my family or friends; nothing from my siblings, my grandparents, aunts and uncles, cousins, or friends. I just wanted something that would calm my fears. My phone was silent, and my worries were loud.

I couldn’t concentrate when I studied, and I got my worst test grade ever that week. I donated money, but felt helpless. It was a week before I heard anything from family members and at least a week and a half before I heard from any friends. They were all unharmed, but had no power, no water, no fuel, and little food.

When an opportunity came to go to Puerto Rico with a team from VCU and work with the Iniciativa Comunitaria Organization, I quickly changed my holiday plans. I leapt onto the airplane with 17 suitcases filled with supplies we collectively gathered. As we flew in at night, I could only see patches of dark, lightless, towns.

Resilience of a community
One of the most memorable experiences was a trip to a town called Ciales, about 45 minutes away from where I grew up. Even though it had been three months since the hurricane, I could clearly see the devastation of Maria as we drove. Electrical poles are still laying on the side of the highway and even on the sides of houses. Blue tarps covered many of the roofs. The roads were valleys between mountains of debris on either side. To this day, the people of Ciales are still filling containers with water from PVC pipes that jut out of the mountain side because they still don’t have access to running water.

The day before we arrived, a local church had gone door-to-door to announce that our group was coming to provide medical care. We set up a makeshift clinic on a basketball court and saw about 60 people that day. You could tell that they were hardworking people when only the deepest setting for the lancet was able to draw blood from their callous fingers. We took histories and vitals and made sure patients with chronic diseases had enough medication. But more than anything, they needed someone to listen to their stories. Old ladies with arthritic hands were still hand-washing their clothes. A woman with sleep apnea couldn’t use her CPAP machine because she couldn’t afford a battery pack. One family spent well over $1,000 in gasoline for their generator.

The stories of the people were striking, but what was even more impressive was the optimism and positive attitudes of people who have every reason to complain. One family ornamented piles of debris with Christmas decorations. A farmer who had lost all of his crop was proud to share that it was already growing again. Puerto Ricans are very proud of our little island and as a sign of solidarity and hope, almost every house we drove by had a Puerto Rican flag displayed. 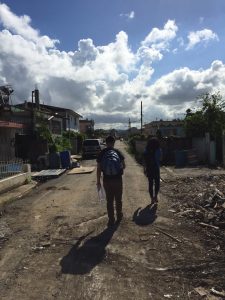 On another day, we went door to door providing medical services in Barrio Ingenio, a neighborhood in Toa Baja. Walking through the neighborhood, you would have thought the hurricane had happened just the day before. Severe flooding and mud left almost half of the neighborhood abandoned. Names of residents were spray painted on the sides of houses, a result of the rescue efforts. We saw cars in garages completely covered in mud.

The people we talked to were mainly elderly living alone. Many had uncontrolled chronic diseases, chronic pain and had trouble sleeping. Aside from counseling them to comply with their medication regimen, there was little we could do. Counseling them to eat a balanced diet and limit their salt intake was of no use, as many of them eat what they can find or whatever they are given. Even now, the neighborhood still has no power, so they rely on processed and canned foods.

As we walked through the neighborhood we saw a tent with a big gathering of people. It was a block party set up by their community leader. She told us that many in her community are suffering from depression and she is doing her best to organize events to lift people’s spirits. Again, I walked away saddened by the devastation from the hurricane but encouraged by the resilience of the community.

Rebuilding together
When we weren’t traveling to different towns, we worked at a clinic in Toa Baja where I was able to practice my interview and physical exam skills. Most of the patients we saw still had no access to their primary care physician or their children’s pediatrician, either because the offices still had no power or because their doctor had left the island indefinitely. In between patient visits, we helped the clinic organize the many donations they received. It was encouraging to see how many individuals and organizations were coming together to make this volunteer clinic run.

I have been to Puerto Rico many times. It’s where I grew up. But this time spent in Puerto Rico was different. In exchange for my small contribution to a long and hard rebuild of the island, the trip contributed greatly to my understanding of what matters most. As a medical student I learned many things. My experience reinforced the importance of listening and taking into account situations and environments when treating a patient’s conditions. Perhaps more significant than that was a life lesson my people taught me: when disaster strikes, rebuild. Absolutely everyone on the island was affected by the hurricane. Though it tore infrastructure apart, Hurricane Maria brought the people of Puerto Rico together. Everyone is suffering together, but they are also all rebuilding together. There is a lot of work to do, but with the positive attitudes of the people, time, and patience, the island will breathe life again.