As clerkship director at VCU’s Department of Emergency Medicine, Nathan Lewis, M’09, H’12, works to foster an atmosphere where everyone — including Lewis — can be themselves. 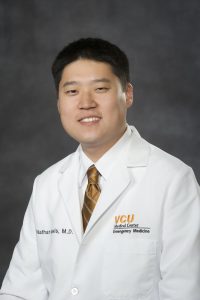 As clerkship director at VCU’s Department of Emergency Medicine, Nathan Lewis, M’09, H’12, works to foster an atmosphere where everyone — including Lewis — can be themselves. That is easier said than done, as many medical students do not naturally feel comfortable acknowledging they do not have every answer.

At the same time, that acknowledgment can be a critical first step toward asking questions and learning. With his signature humility, Lewis says the ability to put students at ease is his key gift as an educator.

“Myself along with other folks are trying to promote an environment where it’s a safe place for students to really challenge themselves,” Lewis says. “This gives them more experience and more confidence in what they are doing.”

If you ask why he is such a key part of introducing students to the specialty, he will tell you it is actually a group effort. Talk to his colleagues, though, and you find people who are eager to shine a light on Lewis’ singular talent for guiding medical students through the complex world of emergency medicine.

“It’s quite an honor for something you see as your day-to-day job,” Lewis says. “I have terrific peers who supported me for the nomination. We wouldn’t be able to do the things we do without great support from the administration and the department. We put a focus on learning.”

Medical education is undoubtedly a team sport, but it’s one in which Lewis plays a valuable role, as colleagues are quick to point out.

“Nathan is incredibly dedicated,” says Joel Moll, M.D., an associate professor and director of the department’s residency program. “He’s meticulous and he’s a good advocate for education. He goes above and beyond but he’s kind of quiet about it.”

Even when other responsibilities hold the potential to shift his focus away from education, Lewis’ peers said he simply does not allow it to happen.

“We had someone leave for another job, and Dr. Lewis was running the coordination side as well as the education side, but the students never noticed,” Moll says. “He made sure things got done and he was willing to take on a lot. He’s going to do what is necessary to make a good experience for students.”

Lewis’ contributions to emergency medicine and medical education reach beyond the clerkship he directs. He also co-hosts EM Stud, a podcast for medical students around the country considering careers in emergency medicine.

“The podcast reaches a lot of students and it has a lot of visibility,” Moll says.

First and foremost, though, Lewis remains dedicated to the clerkship he directs — and the colleagues who help him make it happen. And if he ever needs someone to help him brag, well, they have his back for that too.

“He takes a personal approach to it and students really come to trust him,” Moll says. “He has helped countless students learn more about medicine. He’s an unsung hero, and now he’s getting recognition.”