From the time he was 5 years old, R. Randolph Duffer, M’72, H’75, worked on the family farm in Charlotte County, Virginia, milking cows and harvesting tobacco.

From the time he was 5 years old, R. Randolph Duffer, M’72, H’75, worked on the family farm in Charlotte County, Virginia, milking cows and harvesting tobacco. 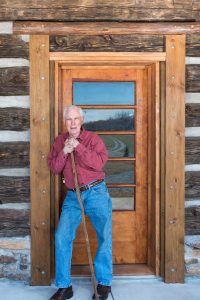 “Being a country doctor, your patients become family,” says the Class of 72’s Randolph Duffer. “I may help them as their doctor, but they are always helping me with plumbing, electrical work or whatever needs doing.”

At 13, he began spending his summers curing tobacco leaves inside one of several tobacco barns on the property, sleeping under the barn’s attached shed.

“My father would bring me breakfast, I’d buy lunch up the road, and then my father  would bring me dinner,” Duffer says. “It was hard work, but it was all we knew. It was a way of life then.”

Tobacco was the major crop in rural south central Virginia. As far as the eye could see, tobacco barns dotted the landscape.

Today, not so much.

“Very few are surviving,” Duffer says. “Most are rotting. It’s sad to see them disappear.”

Duffer is doing his part to preserve his past. In 2013, he began disassembling the pine log structures on his family’s land and rebuilding them on his 200-acre farm
in Gretna, about 40 miles away. He has completed two, making the second one his home. He plans to begin work on the third barn this spring.

“This is part of my history,” says Duffer, who has been practicing rural family medicine in Gretna for 42 years. “I have a responsibility to save it.”

The first barn originally featured four rows of tier poles, used to dry the tobacco. Duffer transformed it into a log cabin, complete with a living room, dining room and kitchen. He added on a rescued shed that contains the bedroom and bathroom.

The second barn is larger, with a front and back porch and a guest bedroom and bath. Duffer moved from the first to second barn earlier this year.

“It’s a piece of art, just like a painting or a sculpture,” Duffer says.

Duffer used reclaimed wood from homes in the area for kitchen cabinets, doors and floors. He learned construction skills from his father, Rufus Joe Duffer, who was a
part-time carpenter, and receives help on his projects from neighbors, friends and family.

“Being a country doctor, your patients become family,” he says. “I may help them as their doctor, but they are always helping me with plumbing, electrical work or whatever
needs doing.”

Duffer knew early on that he would practice medicine. His uncle, Aubrey, an MCV alumnus, practiced dentistry. “My father, in all his wisdom, sat me down and encouraged me to go to medical school,” Duffer says.

He chose rural medicine because he is “a country boy at heart.” Today, he inspires others to do the same. Over the years, he has precepted dozens of students, including his first from the MCV Campus last year.

“There is such a need for rural family health care, and the reward is great,” he says. “It may not be as lucrative, but the satisfaction completes you.”

At 72, Duffer has no plans on retiring. “That’s not in my vocabulary,” he says. “When you have a passion for something, you want to do it as long as you can.”

“The little gravel road that leads to my house is called Farmers Road,” Duffer says. “What a perfect name. Every day, it takes me back to my roots. It takes me home.”