The stethoscope is so vital that on the MCV Campus it is introduced to first-year medical students on their very first day of class. 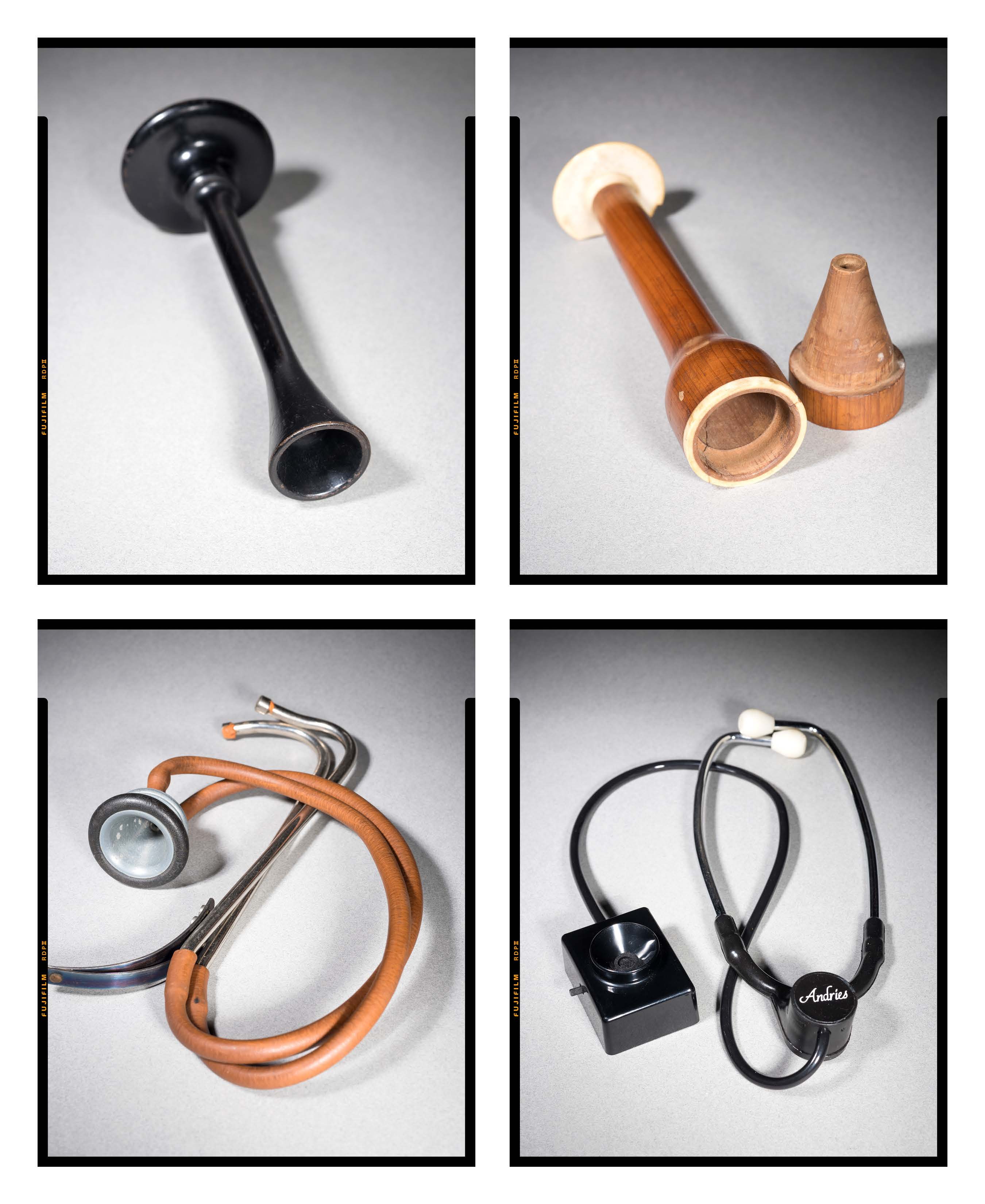 Kimberly Pedram, M’04, purchased her first stethoscope before starting her second year of medical school. It became a part of her the moment she draped it across the back of her neck.

“In almost any field of medicine you go into, you have it with you at all times,” she says. “It’s an amazing little tool.”

The stethoscope is so vital that on the MCV Campus it is introduced to first-year medical students on their very first day of class.

“They learn to use it on day one,” says Pedram, an associate course director for the medical school’s Practice of Clinical Medicine. “It is a pretty easy tool to grasp, once someone shows you the basics.”

The stethoscope dates to 1816, when Rene Laennec, M.D., was examining a young woman experiencing heart issues. Painfully shy, he could not bring himself to press his ear against her chest. He rolled sheets of paper into a cylinder and, according to Laennec, “applied one end of it to the region of her heart and the other to my ear, and was not a little surprised and pleased to find that I could thereby perceive the action of the heart in a manner much more clear and distinct.”

Laennec’s discovery led to his invention of the monaural stethoscope in 1819. While stethoscopes have been in use for 200 years, they surprisingly have undergone few changes.

“It is a fiendishly simple instrument,” says Andrew Bain, who manages VCU’s medical artifact collection in Health Sciences Library’s Special Collection and Archives. “There have been a few tweaks here and there, but the design from the start was effective.”

The library houses several stethoscopes that highlight its evolution through the ages. The oldest two are monaural stethoscopes and date to the 1830s or 1840s. Both are made of solid wood – one ebony (A) and the other oak or maple (B).

“They are most likely American made, but we don’t know which company,” Bain says. “The history of artifacts is sometimes a tricky thing. We don’t always have a lot to go on.”

Monaural stethoscopes are a solid wooden cylinder with a drilled center that could be unscrewed for carrying in a pocket. At one end, a chest piece auscultated the heart and when removed, the large opening allowed physicians to listen to broader areas of the chest, like lung sounds.

By the 1850s, the monaural stethoscope was a standard and vital part of a physician’s medical bag.

“This is something that didn’t exist at one point, then all of a sudden they were everywhere,” Bain says. “In retrospect, it seems so obvious.”

The monaural stethoscope became obsolete by the 1860s, with the invention of George Cammann’s binaural stethoscope that allowed physicians to hear chest sounds with both ears. The Health Sciences Library houses several of these types of stethoscopes as well.

One in the collection, an Andries electronic stethoscope (C) that dates to the late 1970s or early 1980s, houses a small battery and speaker that amplified sounds, making it easier to hear. This type never became popular, Bain says.

Another in the collection dates to the 1890s (D) and is the more typical binaural stethoscope that became the standard across the world. It has flexible rubber tubing, and a hinged metal piece allows for folding to a more compact size.

“The downside of the monaural stethoscope was that you could only hear out of one ear,” Bain says. “It was a natural thing to want to improve upon an instrument that allowed physicians to hear inside the body.”

Even with the invention of MRI machines, ultrasounds and CT scans, stethoscopes remain a vital part of medicine.

“They are really a physician’s first line of defense,” Bain says. “It gives a practitioner a lot of information very quickly.”

Family physicians, emergency room doctors, specialists, nurses and EMTs, alike, pull out their stethoscopes when seeing a patient. They can quickly pinpoint areas of concern in the heart, lung and abdominal area.

“You get pretty attached to your stethoscope,” Pedram says. “I had the same one for nearly 20 years until it finally fell to pieces. Santa got me a new one for Christmas just like my old one. I never go far without it.”