'These experiences touch your heart. You can't just ignore them.' 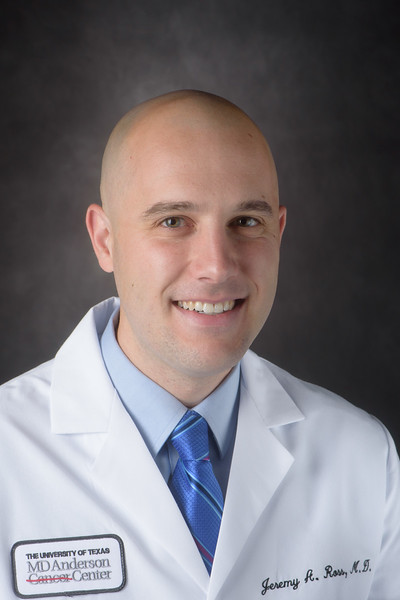 Oncologist Jeremy Ross, M'13, uses writing to honor his patients while providing an outlet for himself.

As a child, he idolized his father, Michael Ross, M’71, H’73. Their dinner table conversations reflected his dad’s dedication to treating patients who have cancer, not just the disease, and that made a huge impression on him.

So, when Ross decided to pursue medicine, he applied to the VCU School of Medicine, his dad’s alma mater.

“That was definitely why I went to VCU,” he says. “I knew all along if I got in there I was going to go, not just because I thought it was so cool to go where my dad went, but to honor him and to continue his legacy.”

Ross currently works as a hematology-oncology fellow and chief fellow for education at MD Anderson Cancer Center in Houston. Working with severely ill patients can take its toll. Ross remembers his father having to leave a room if a television show or movie featured someone who had cancer. He didn’t understand it at the time. Now he does.

“It’s a lot of suffering and you’ve got to have a way to deal with it,” he says.

His outlet comes through writing. Throughout his training, Ross has encountered patients whose stories have stuck with him. He began putting pen to paper to pay tribute to his patients, while providing a release for his own emotions.

“It’s one of the ways I deal with all of the loss and suffering I see by writing about these special patients,” he says.

His work has been published in various medical journals (see below for links). Ross tries to write at least 100 words a day, but stories can take him a couple of months to finish. He hopes the final essays appropriately describe his warm interactions with patients and the lessons he learned from them.

“These experiences touch your heart. You can’t just ignore them,” he says. “I want to inspire other doctors to be compassionate and to remember the fact that medicine is a calling.”

Ross credits the MCV Campus for preparing him for his vocation and supporting him when he struggled early in medical school. He particularly remembers Christopher Woleben, M’97, H’01, associate dean of student affairs, as being especially supportive.

“I had a lot of self-doubt,” Ross says. “I don’t think I blossomed until the third or fourth year. Dr. Woleben was a comfort during those times that were more difficult.”

Woleben says it’s not uncommon for students to have difficulty navigating the early years of medical school.

“That’s typical as they try to get through the first two years,” he says. “It becomes more meaningful and impactful when they move into clinical rotations and are with patients every day.”

It’s no surprise to him, either, that Ross uses writing as a method of dealing with the stresses of the job.

“We try to teach our students to be reflective,” Woleben says. “We try to instill in them how important it is to take that time.”

In July, Ross will join his father in the practice the elder Ross founded in Fort Worth, Texas, and where many of the people who work there knew him as a boy and watched him grow up.

It will be a new era for the Ross legacy, and — no doubt — new themes for stories that need telling.