Unlocking the mysteries and mechanisms behind psychedelics’ antidepressant activity

School of Medicine researchers are looking to understand the antidepressant effects of psychedelic drugs, with an eye toward developing non-hallucinogenic versions.

After being relegated to the fringes of legitimate scientific inquiry for the better part of half a century, an increasing number of researchers, including Department of Physiology and Biophysics’ Javier González-Maeso, Ph.D., and Mario de la Fuente Revenga, Ph.D., are exploring the potential of psychedelics and related compounds as a treatment for severe depression.

Currently patients must take antidepressant medications for weeks, or even months, before they start to see the first therapeutic effects, according to González-Maeso. However, recent research has shown that a single dose of psilocybin, the psychoactive compound in so-called “magic mushrooms,” can have faster acting, longer lasting antidepressant effects.

In one study conducted at Imperial College London, participants with treatment-resistant depression experienced "markedly reduced" symptoms one week after taking a single dose of psilocybin, relief that continued three months later. In another study conducted at Johns Hopkins University School of Medicine, 80% of people diagnosed with terminal cancer and depression who received a single dose of psilocybin continued to show improvements in their mood after six months. 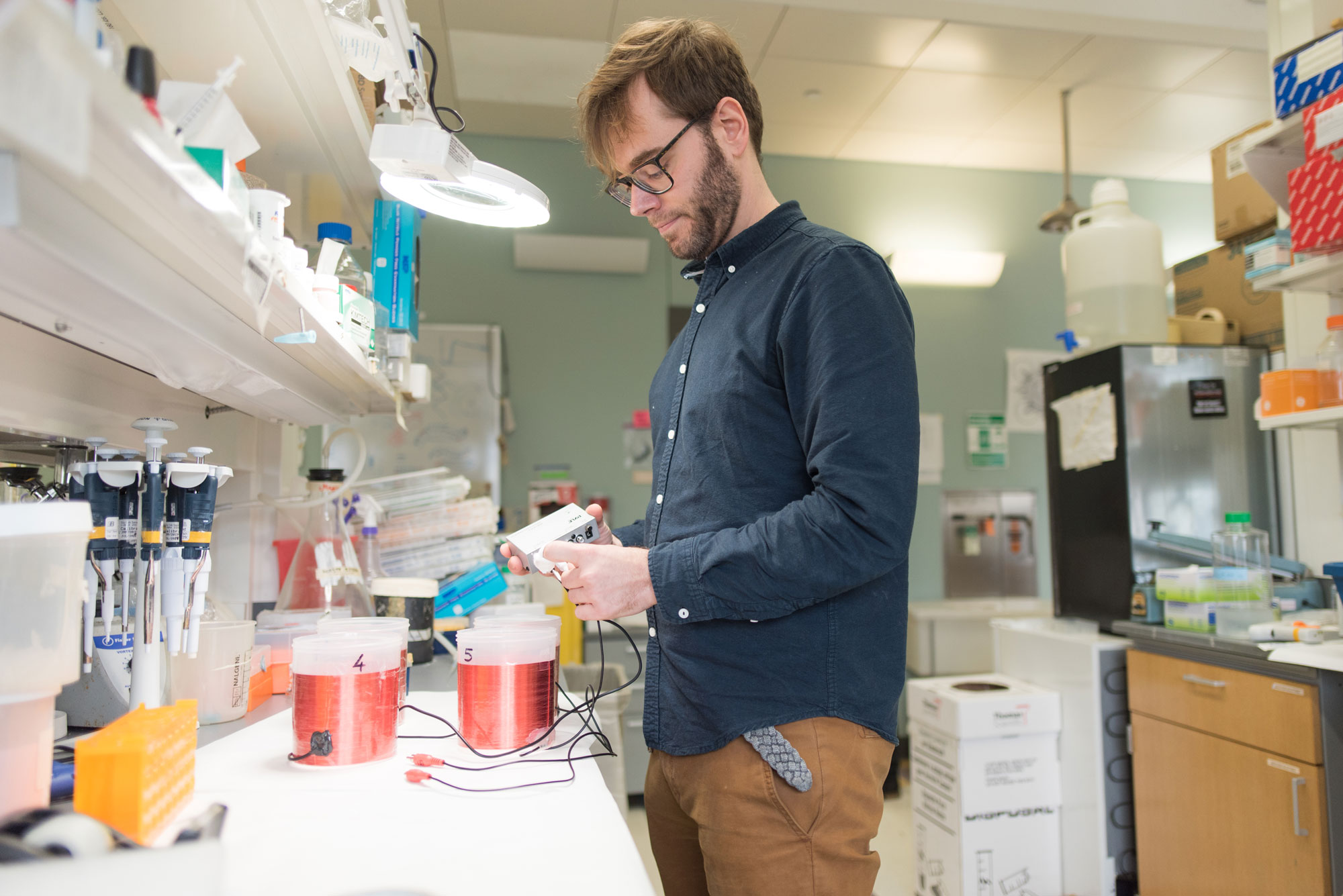 Researcher Mario de la Fuente Revenga, Ph.D. works in the lab within the Department of Physiology and Biophysics.

Such reports have stoked a desire to understand why taking these drugs can lead to such dramatic outcomes. Is it the hallucinogenic trip itself that is therapeutically beneficial? Or are psychedelic compounds affecting the brain at a more fundamental level?

This is what González-Maeso and de la Fuente are trying to better understand. In their lab, they have removed the subjective human experience by observing the underlying effects of psychedelic compounds in mouse models for depression.

“We don’t know if mice have mystical experiences, but we do know in these models that there is definitely an antidepressant-like response that we can measure,” said de la Fuente, a postdoctoral fellow in González-Maeso’s lab.

There also are observable changes in their brains, according to the results of a controlled study González-Maeso presented at the inaugural meeting of the International Society for Research on Psychedelics in New Orleans in October 2019.

As part of this study, which was funded by two NIH R01 grants, adult male mice were exposed to a series of stresses that lead to depression-like behaviors. Then, one group received a single dose of a psychedelic similar to psilocybin called 2,5-dimethoxy-4-iodoamphetamine (DOI). Twenty-four hours later, these mice were observed to exhibit fewer behaviors associated with depression and had increased synaptic density in their frontal cortexes than the mice that did not receive DOI.

This is significant because previous research has shown that people experiencing depression often have fewer synaptic connections, especially in areas of the brain responsible for regulating mood and cognition, such as the frontal cortex.

“Our preliminary data suggest that a single dose of the psychedelic DOI induces fast-acting effects on dendritic spine structure and remission of behavioral states associated with depression,” González-Maeso wrote to summarize these findings.

González-Maeso and de la Fuente hope that by identifying the changes that psychedelics promote in the brain, they might be able to develop purely clinical versions of these drugs.

González-Maeso and de la Fuente already have provisional U.S. patents for two such compounds that they plan to test for their antidepressant potential, and de la Fuente is enthusiastic about what the future holds.

“Psychedelics have been a banned field for decades,” he said. “Now, with a more open attitude, we have all of the technological advances that we’ve accumulated over this time to apply to a growing field that almost nobody has explored before. From a scientific point of view, it is essentially the ‘promised land’ and will hopefully yield results that will make a real difference in the clinic.”

Javier González-Maeso, Ph.D., joined the faculty of the VCU School of Medicine in 2015 and is currently an associate professor in the Department of Physiology and Biophysics. His research group studies the molecular mechanisms responsible for psychiatric disorders, including schizophrenia, depression and alcoholism, as well as the basic signaling processes by which psychoactive drugs induce their therapeutic effects.

Mario de la Fuente Revenga received his Ph.D. in medicinal chemistry from Universidad Complutense de Madrid in Spain and joined Javier González-Maeso’s laboratory at VCU as a postdoctoral fellow in 2015. His research interests include epigenetic mechanisms in the treatment of schizophrenia, the application of translational neuroscience to the development of novel antipsychotics, and the clinical pharmacology of hallucinogens and their therapeutic potential.