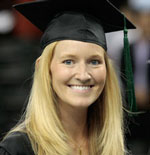 Ann Miller Wilson, M’09, is the 15th member of five generations of her family to graduate from the medical school.

The Davis family’s connection to medical school spans 128 years. On May 15, 2009, Ann Miller Wilson shook the hand of the dean of the medical school, recited the Hippocratic Oath and joined the medical profession. Just as her great-great-grandfather must have done in 1885.
A member of the Class of 1894, John Gibson Davis, M.D., was the first of his family to attend the Medical College of Virginia. Part of the first medical school class to take the Virginia state medical board exams, he also blazed the trail that 13 of his descendants followed over the next 12 decades.
For her senior project this semester, Ann Miller Wilson—or “Miller” as she’s known—chronicled the five generations of her family who walked the halls and hospitals of the MCV Campus on their way to earning their medical degrees. Associate Professor of Anesthesiology Robert A. Kravetz, M.D., oversaw her historical research that produced a power point presentation packed with family pictures and archival documents that have somehow stood the test of time. 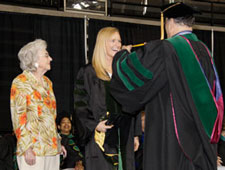 At the medical school’s convocation ceremony on May 15, Miller was honored as one of her class’ legacy graduates. She was joined on the stage by her grandmother Mrs. E. D. Sowder, whose father and grandfather were MCV graduates.

At his death at the age of 89, Miller’s great-great grandfather John Gibson Davis was the oldest practicing physician in the Roanoke Valley. At that point, all five of his sons had already followed in his footsteps to MCV where they too, earned their medical degrees. One of those sons was Miller’s great-grandfather Paul Davis, M’15 who would try—unsuccessfully—to discourage his daughter Pauline from carrying on the family tradition.
The summer before her matriculation to medical school, the Roanoke Times reported her father’s perspective: “It was not my idea for her to take up the study of medicine. I have discouraged the idea from the beginning, but she seems firmly convinced that this is the only thing which will make her life happy.”
Pauline Davis would become one of just eight women to graduate with an M.D. from MCV in 1942. And until this year, she was the only woman in the Davis family with that accomplishment.
Of Pauline’s three sons who became physicians, one, Paul Carmichael, M’75, drew Miller into the profession. When she was in high school and college, he permitted her to scrub into his surgeries at Roanoke Memorial Hospital.
The 15th in her family to pursue her degree on the MCV Campus, Miller predicts, “There could be more of us on the way. Dr. Gordon Carmichael’s kids are in high school and want to go to medical school… no matter what I tell them.” 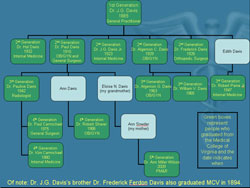 Ann Miller Wilson’s senior project chronicles not only her family’s history but also reflects the changing face of medicine. View her PowerPoint presentation.