Paul H. Wehman, Ph.D., is a professor in physical medicine and rehabilitation at VCU’s School of Medicine. 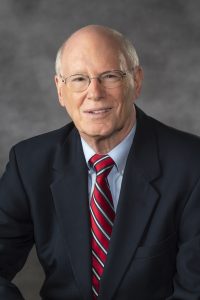 Wehman’s career is dedicated to the employment of people with physical and intellectual disabilities, and his contributions to special education, vocational rehabilitation and rehabilitation medicine are respected locally, nationally and internationally.

His interdisciplinary scholarship spans more than 40 years, and he is known for pioneering the development of supported employment, a rehabilitation intervention strategy that has facilitated competitive employment for millions of people with severe neurodevelopmental disabilities, autism, brain injury, mental illness, physical disabilities and spinal cord injury in countries around the world.

He has researched, written, instructed and presented extensively on every aspect of vocational rehabilitation, having published more than 200 articles and 115 book chapters, and authored or edited 43 books. In addition to his writing and scholarship, Wehman is the founding editor of the Journal of Vocational Rehabilitation, which provides a forum for discussion and dissemination of research and evidence-based best practices.

“He embodies the type of international reputation and influence that VCU strives for, and he has been a superior ambassador for the institution for his entire career,” says David Cifu, M.D., executive director of the VCU Center for Rehabilitation Sciences and Engineering. “Most importantly, Dr. Wehman is a service-based leader who has changed the field of disability and rehabilitation forever, both through his direct scholarly achievements and through his willingness to continually step up on the federal platform and champion their rights and potential.”

For his decadeslong work, he has been honored many times over by numerous organizations. He was recognized in 2000 as one of the 50 most influential special educators of the millennium by peer-reviewed journal Remedial and Special Education.

The Distinguished Scholarship Award recognizes an outstanding scholar who has demonstrated a pattern of productive scholarly activity, which has been recognized nationally or internationally, as appropriate. Traditional research, creative endeavors and other scholarly activity are included in this category. Wehman received the award at the university’s 2018 Faculty Convocation.