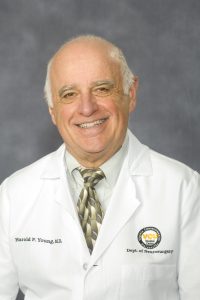 Dr. Harold F. Young’s name is synonymous with excellence and humanism. He came to MCV as an Associate Professor of Neurosurgery in 1972, and served as Chair of the Department of Neurosurgery from 1985 to 2015. He is currently Professor of Neurosurgery, and Director of the Harold F. Young Neurosurgical Center. Dr. Young’s exceptional career has been dedicated to service to patients, service to his students, and service to improving health care through applied scholarship. As Chair, Dr. Young assembled a team recognized nationally for its research and clinical care. The VCUHS Neurosurgical Center, named for Dr. Young, trains young clinicians and scientists to work together to provide evidence-based and compassionate patient care; in fact, the stated mission of the Center is the commitment “to providing exceptional and compassionate patient care.”

If you ask patients or colleagues about Dr. Young, what you will hear about first and foremost is his commitment to his patients. His absolute expectation that all patients and their families, as well as colleagues from all disciplines, will be treated with the highest respect and consideration, without exception, has helped to raise the expectations for compassionate care throughout our medical center. Calling every patient the evening before surgery, and being in the O.R. to hold every patient’s hand as he or she is placed under anesthesia, are things that modern surgeons just don’t do, but they go a long way towards reducing a patient’s anxiety. In turn, he has taught his students and residents to do the same. His clinics tended to run late because he spent time talking with his patients— not just about their medical problems, but about their families, their communities, and their lives. Every evening, he would pick up the infamous stack of pink slips with phone messages from patients, and he would spend the rest of the evening returning their calls. When complimented on his achievements, he says, “I was able to do this because…” and lists his co-workers and their contributions, giving the credit to those around him.

Dr. Young’s connection with his patients is such that in 2010, a patient that Dr. Young had not seen in over 40 years, Donald Mason, traveled to VCUHS to be reunited with the physician who had treated him three separate times during Mr. Mason’s military service in the Vietnam War. In Chu Lai, Dr. Young saved Mr. Mason’s life by operating to repair damage from a significant brain injury caused by a missile wound. Later, Dr. Young cared for Mr. Mason at Fitzsimons Army Hospital in Colorado and again, in Kansas City. Although Mr. Mason did not know Dr. Young’s full name, he and his wife tracked down the surgeon who had such an impact on his life. “I thought about him every day.” said Mr. Mason, “He is just like family to me.”

In 2014, the VCU School of Medicine opened the McGlothlin Medical Education Center, funded, in part, by a gift of $25 million from the McGlothlin family in honor of Dr. Harold Young’s compassionate clinical care and excellence in teaching.

Dr. Young has served on the Board of Directors of the MCV Foundation since 1994. In 1997, he received the University Award of Excellence, the highest honor that VCU bestows on faculty and in 2014, Dr. Young was honored with the VCU Presidential Medallion.

Dr. Young is held in the highest regard by everyone he encounters and has served as a role model for generations of students, residents, and faculty. His humanistic approach to patients, their families, and colleagues underlies his excellence in clinical care, education, and scholarship, and exemplifi es the ideals of the Leonard Tow Humanism in Medicine Award.